Update Required To play the media you will need to either update your browser to a recent version or update your Flash plugin.
By Bryan Lynn
28 June, 2016


The United Nations is continuing to build legal cases against North Korea's leadership for crimes against humanity.

UN officials are gathering statements and other evidence from more than 30,000 North Korean defectors to support the cases.

Human rights activists and UN representatives met in Seoul on Monday to discuss the latest developments in the investigation. 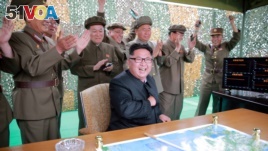 Signe Poulsen represents the Office of the High Commissioner for Human Rights in Seoul. She said the investigation is continuing, but it takes time and is hard to prepare a case based on information from defectors alone.

"Verification is extremely difficult and it is an ongoing challenge, and I think something we have to be quite humble about because we don't have access at the ground level."

The investigators are trying to collect evidence linking North Korean leader Kim Jong Un and other high-level officials to crimes against humanity.

In 2014, a UN Commission of Inquiry called on the UN to refer North Korea's leadership to the International Criminal Court.

The UN General Assembly voted in support of the Commission of Inquiry's call for action. But the measure was never passed in the Security Council, where North Korea's allies China and Russia would likely veto it.

The Security Council ordered new sanctions on North Korea earlier this year for carrying out a nuclear test and launching a long-range rocket. Those measures are not directly linked to the international concerns about the country's human rights record.

Marzuki Darusman is the UN Special Rapporteur on North Korea. He said UN officials and human rights groups continue to build legal cases against North Korean officials. But he said those cases may never be brought unless the government of Kim Jong Un collapses someday.

"That is quite unique in that sense, compared to the general practice where justice seeking is then implemented after the big bang, so called," he said.

UN investigators believe Kim should ultimately be held responsible for the atrocities committed in North Korea. They say they have found orders and handwritten notes directly connecting him to some crimes.

"We know those agencies, we know the hierarchy within those agencies and we even have many lists of names of officials who are still there, who have been holding positions at these agencies."

But North Korea expert Remko Breuker, from Leiden University in the Netherlands, disagrees.

"Where does accountability stop? When do people have no other choice than to obey? This is ideally something I think that should be left to North Koreans to decide."

UN officials and activists working to build a case against the North Korean leadership know that no legal action is likely to happen anytime soon. But they remain hopeful that one day the political environment will change to make prosecutions possible.

Brian Padden reported this story for VOANews. Bryan Lynn adapted his report for Learning English. George Grow was the editor.

defector – n. person who abandons their country for another one

verification – n. the process of establishing whether something is true or not

humble – adj. not proud; not thinking of yourself as better than others

hierarchy – n. a system that places people or things in difference levels and importance

prosecution – n. the act of holding a trial against a person accused of a crime to establish guilt or innocence