Update Required To play the media you will need to either update your browser to a recent version or update your Flash plugin.
By Alice Bryant
05 December, 2016


The United Nations, or U.N., is asking for $22.2 billion dollars to provide life-saving help for nearly 93 million people worldwide.

The U.N. made the request on Monday to international donors. The request says the donations would go to helping the most vulnerable people in 33 countries.

U.N. officials say the world is facing its biggest humanitarian crisis since World War II. They say more than 128 million people are in need of urgent support. The people are said to be victims of conflict, displacement and natural disasters. 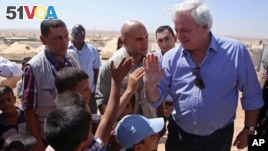 Of this number, U.N. officials are requesting money to help the individuals most severely in need of life-saving assistance.

Stephen O'Brien is the U.N.'s Under-Secretary-General for Humanitarian Affairs. He says the donations will make a big difference in the lives of tens of millions of people.

O'Brien said the money will be used for life-saving food assistance to people close to starvation in areas including the Lake Chad Basin and South Sudan. The donations will also help people in other countries.

"It will provide protection for the most vulnerable people in Syria, in Iraq, and in Yemen. And, it will enable children, education for children whose schooling is disrupted by El Niño among many other responses."

The crisis in Syria is the United Nations' biggest humanitarian concern. The U.N. plans to help nearly 13 million Syrians who are displaced within the country or living as refugees in neighboring countries.

O'Brien says humanitarian assistance is only a temporary solution. He told VOA that a political solution is the only thing that will end the suffering in Syria. He noted that the Syrian conflict is more than five years old.

"Humanitarians can do no more than fill the gaps of people who either need food or shelter or medicines or treatments or evacuation or who need access to water and sanitation and hygiene and other non-food items in order simply to survive."

In addition to Syria, U.N. officials said that Yemen, South Sudan and Nigeria are among the countries with the greatest humanitarian needs. They have had large displacements of people inside and outside their borders.

The United Nations noted that about 1.2 million people have fled South Sudan, making this the biggest refugee movement in Africa. Eighty percent of those who fled are women and children.

We want to hear from you. Write to us in the comments section.

disrupt - v. to cause something to be unable to continue in the normal way

El Niño - n. a flow of unusually warm water along the western coast of South America that causes many changes in weather in other places

evacuation - n. to remove someone from a dangerous place

sanitation - n. the process of keeping places free from dirt, infection, and disease by removing waste, trash and garbage

hygiene - n. the things that you do to keep yourself and your surroundings clean in order to maintain good health