UN: More People Hungry than Ever Before in 2021

Update Required To play the media you will need to either update your browser to a recent version or update your Flash plugin.
By Hai Do
04 May 2022


The United Nations said Wednesday that the number of people without enough food to eat daily reached an all-time high last year.

The organization noted that the situation is getting worse as the war in Ukraine affects food production worldwide.

Almost 193 million people in 53 countries suffered from what the U.N. called food insecurity in 2021. It was caused by conflict, extreme weather, and the economic effects of the coronavirus pandemic. 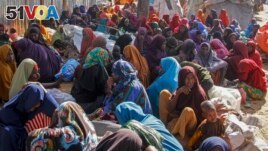 FILE - Somalis who fled drought-stricken areas sit at a makeshift camp on the outskirts of the capital Mogadishu, Somalia on Feb. 4, 2022. (AP Photo/Farah Abdi Warsameh, File)

The U.N. said the total number of people without enough food to eat daily increased by 40 million over the period. It confirmed a "worrisome trend" of yearly increases.

The numbers appeared in the Global Report on Food Crisis. The report is produced jointly by the U.N. Food and Agriculture Organization, the World Food Program, and the European Union.

The report predicts that Somalia will face one of the world's worst food crises in 2022. The African country faces prolonged drought, increasing food prices, and continuing violence. These problems could lead 6 million Somalis into a severe food crisis, the U.N. said.

"Today, if more is not done to support rural communities, the scale of the devastation in terms of hunger and lost livelihoods will be appalling," the U.N. said. The organization added urgent action is needed "to prevent that from happening."

The war in Ukraine has resulted in more risks for Somalia and many other African countries. They depend on Ukraine and Russia for wheat, fertilizer, and other food supplies.

Rein Paulsen heads one of the Food and Agriculture Organization's offices. He said the war in Ukraine is a "real cause for concern" and increases "the acute food needs that exist in these food crisis countries."

The U.N. previously said the war was pushing prices for grains and vegetable oils to record highs, threatening millions with hunger and malnourishment.

The report called for greater investment in agriculture and appealed for $1.5 billion to help farmers in at-risk areas. The money would help in the upcoming planting season to stabilize and increase local food production.

trend –n. a general direction of change in which something is developing and becoming more common