Update Required To play the media you will need to either update your browser to a recent version or update your Flash plugin.
By Ashley Thompson
07 March, 2019


Rights groups and government organizations around the world are recognizing International Women's Day on Friday.

The day -- March 8 -- is a celebration of women's social, economic, cultural and political successes in the world, as well as a call for gender equality.

It all began in 1908 in New York City. Thousands of female clothing workers went on strike and marched through the streets of the city. They were demanding better pay, shorter workdays and voting rights.

In 1910, a German woman named Clara Zetkin suggested the declaration of a Women's Day at an international meeting attended by 100 women. The idea received support from everyone there.

Women's Day was first celebrated in 1911 in Germany as well as Austria, Denmark and Switzerland. More than 1 million women and men attended demonstrations in support of a woman's right to work, vote, study and hold public office.

The United Nations officially recognized International Women's Day for the first time in 1975.

This year, the UN's theme for the day is "Think equal, build smart, innovate for change." The UN aims to use the day to bring attention to "public services, safe spaces and technology to advance progress for women and girls."

Violences and other dangers

There are also new efforts centered on ending gender-based violence during war and ethnic conflicts. Last month, Red Cross and Red Crescent and the UN began working together to end the use of rape as a weapon of war. 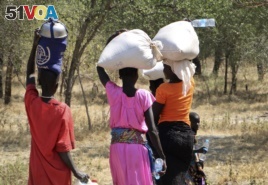 FILE - In this file photo, women and girls walk back after getting food in Bentiu, a 38-kilometers path through the bush, for fear of being attacked on the main road, near Nhialdu in South Sudan. Sexual violence persists in South Sudan's northern region, according to a report issued Friday Feb. 15, 2019, by the United Nations. (AP Photo/Sam Mednick, FILE)

U.N. Secretary-General Antonio Guterres said, "Sexual and gender-based violence in conflict is not only a horrendous and life-changing crime...It is also used as a tactic of war, to terrorize families, dehumanize communities and destabilize societies."

Also last month, Sierra Leone President Julius Maada Bio declared rape a national emergency in his country. He warned that anyone caught having sex with a minor could face up to life in prison.

He said, "These despicable crimes of sexual violence are being committed against our women, children and even babies."

On Wednesday, the International Rescue Committee (IRC) released its report on the five most dangerous place in the world to be a girl. They are: Niger, Yemen, Bangladesh, South Sudan and the Central African Republic. The report considered data on child marriage, birth rates among very young women, literacy, rates of violence and child labor.

Nicole Behnam, director of IRC's Violence Protection and Response office, said in a statement, "Until we achieve true gender equality, young girls will suffer the most. This is unacceptable and it's why the IRC continues to advocate for changes that will improve the lives of girls everywhere."

tactic - n. an action or method that is planned and used to achieve a particular goal

despicable - adj. very bad or unpleasant : deserving to be despised

destabilize - v. to cause (something, such as a government) to be unable to continue existing or working in the usual or desired way

advocate - v. to support or argue for (a cause, policy, etc.)