Update Required To play the media you will need to either update your browser to a recent version or update your Flash plugin.
By Christopher Jones-Cruise
03 May, 2017

It says experts are especially worried about United States' trade policies with important trading partners such as China.

The U.N. Economic and Social Commission for Asia and the Pacific (UNESCAP) report mainly says good things about Asian economies. Such countries are now responsible for about 30 percent of all trade worldwide. The report noted that the percentage could rise to 50 percent by 2050 if the economies continue expanding.

Asia's export-led growth has helped millions of people escape poverty over the past 70 years. Many of the exported products are sold in the United States and Europe.

But the U.N. report notes that in recent years, Asian economies have begun to depend on domestic demand because of the "prolonged weakness in external demand and global trade."

The U.N. economists are predicting that Asian economies will grow at a rate of close to 5 percent in 2017. They expect China's economy to expand 6.5 percent this year, with India's growing by 7.1 percent.

The report described economic conditions in China as ‘stable.' And Russia's economy is expected to grow because of higher oil prices.

It noted recent changes in U.S. policies on trade, monetary exchange rates and immigration. And it said negotiations on Britain's withdrawal from the European Union have increased concerns in many countries. The report said those worried could have a bad effect on Asia, including China's goods exports and India's services exports." 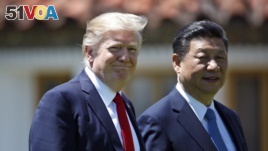 President Donald Trump and Chinese President Xi Jinping walk together after their meetings at Mar-a-Lago, April 7, 2017, in Palm Beach, Fla.

During the U.S. election campaign last year, Donald Trump was very critical of China's trade and monetary policies. But after his election as president, Trump became less critical because he wanted support from China to stop North Korea's development of nuclear weapons.

Shamshad Akhtar is the executive secretary of UNESCAP. She says the debate over protectionism and "distrust of globalization" need to be discussed.

The UNESCAP report said growing global trade has helped many areas over the years. But opposition to globalization is growing in the United States, Europe and other areas. People there are critical of free trade policies, and companies moving jobs to overseas markets.

The writers of the report warned of reduced economic growth in major developing countries if trade protectionism and global insecurity increase. They predicted a lowering of the growth rates by up to 1.2 percentage points.

The report noted that the Asia Pacific region remains "the engine of global growth." But it said pay inequality is increasing and good jobs are difficult to find. It noted environmental damage was a major concern in some countries following years of economic expansion. It said the growth came at a huge cost to the environment.

Ron Corben reported this story from Bangkok for VOA News. Christopher Jones-Cruise adapted his report for Learning English. George Grow was the editor.

domestic – adj. of or related to a country, especially one's own country

external – adj. of or connected with the outside part of something

global – adj. of or related to the whole world

outlook – n. the way that an individual or a group of people think about something

globalization – n. the development of an increasingly international economy