UN Report: 71 Million More People Reported to be in Poverty

Update Required To play the media you will need to either update your browser to a recent version or update your Flash plugin.
By John Russell
17 July 2022


As many as 71 million more people are reported to be in poverty as a result of increased food and energy prices. These prices rose in the weeks following Russia's invasion of Ukraine, the United Nations Development Program (UNDP) said in a recent report.

The UNDP estimates that 51.6 million more people may have fallen into a poverty level defined as living off of $1.90 a day or less in the first three months after the war.

An additional 20 million people dropped to the poverty line of $3.20 a day. 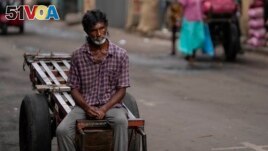 UNDP Administrator Achim Steiner said at the launch of the report, "The cost of living impact is almost without precedent in a generation... and that is why it is so serious."

Precedent means a similar event that happened at an earlier time.

The speed at which this many people experienced poverty went beyond the economic pain felt during the worst part of the pandemic.

The UNDP noted that 125 million additional people experienced poverty over about 18 months during lockdowns and closures. In comparison, around 71 million hit poverty in just three months after Russia's invasion of Ukraine in late February.

"The speed of this is very quick," said George Molina, UNDP chief economist and writer of the report.

Among the countries hit hardest by inflation are Haiti, Argentina, Egypt, Iraq, Turkey and the Philippines. Rwanda, Sudan, Ghana, Kenya, Sri Lanka and Uzbekistan are also in the group.

More people in these countries, some of which have had political problems like Sudan and Sri Lanka, are facing poverty, noted the UNDP.

In countries like Afghanistan, Ethiopia, Mali, Nigeria and Yemen, the effects of inflation are felt deeply by those already at the lowest poverty line.

In Ghana, where the daily minimum wage is $1.80 a day, people are struggling under the weight of inflation. Albert Kowfie, a 27 year-old security guard in Accra, Ghana, said a loaf of bread costs over $2 and travel to work costs another 20 cents.

"It means that by the end of the first week, everything is gone," he said.

Kowfie expressed frustration at the government for not doing more to deal with the issue. "I don't answer my mother's calls anymore because I know she needs help since she is not on any pension, but what can l do?"

Another U.N. report released Wednesday said world hunger rose last year with 2.3 billion people facing moderate or severe difficulty obtaining enough to eat — and that was before the war in Ukraine.

The UNDP's Steiner said the world economy needs to step up. There is enough wealth in the world to deal with the crisis, he argues.

"But," he said, "our ability to act in unison and rapidly is a constraint."

The UNDP advises that governments spend more to reach the most affected people through targeted direct payments to them. These payments are known as cash transfers.

For developing countries to do such transfers, the UNDP called for an extension of debt payments that had been in place during the pandemic among the world's richest nations.

frustration – n. a feeling of anger or annoyance caused by being unable to do something; something that causes feelings of anger and annoyance

unison – n. (in unison) the act of doing something together to achieve something

constraint – n. something that limits or restricts someone or something