Update Required To play the media you will need to either update your browser to a recent version or update your Flash plugin.
By VOA
29 May, 2015


The United Nations Security Council has approved a resolution on the protection of journalists in conflict zones. All 15 Council members voted Wednesday in support of the resolution.

The measure comes as the number of deaths and kidnappings of news reporters and other media workers continues to rise.

The group Reporters Without Borders says 66 journalists were killed last year and more than 20 others have died since January. Over the past 10 years, 700 media workers have been killed, either while on the job or because of their occupation. 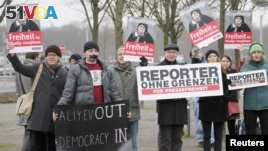 The U.N. resolution condemns such attacks. It warns those involved in conflicts, including governments and armed groups, to take all reasonable steps to protect journalists. It also calls for the immediate and unconditional release of reporters who are held as hostages in battle areas.

Christophe Deloire works for Reporters Without Borders. He said Iraq and Syria have come two of the most dangerous places for journalists to work. Forty-five have been killed in Syria since that conflict started in 2011. In Iraq, at least 15 others have died since 2013. Mr. Deloire said ensuring accountability is important to preventing future attacks.

He added that attacks on journalists in conflict areas could be considered war crimes and should be given to the International Criminal Court.

The United States ambassador to the U.N., Samantha Power, is a former journalist. She says restrictions on press freedom and threats against reporters often are signs of an effort to suppress civil, political and human rights. She noted the current political unrest in the central African nation of Burundi. There, the country's military disputed President Pierre Nkurunziza's decision to seek a third term in office. Many people in Burundi consider a third term unconstitutional.

"Since the unlawful attempt to seize power was quashed, several independent journalists report being told that they are on a list of people to be arrested, and many more reportedly have been threatened with death, torture and disappearance, leading them to go into hiding."

Ms. Power said governments like the one in Syria and armed groups, such as the Islamic State, attack journalists because they do not want people to see them for what they really are.

As the Security Council met Wednesday, the Committee to Protect Journalists released a statement condemning the murder of a Brazilian radio reporter. His tortured body was found last Saturday, one day after he was reported kidnapped in the country's northeast. It was the second murder of a Brazilian journalist in less than a week.

VOA's Margaret Besheer reported on this story from the United Nations. George Grow adapted it for Learning English.

journalist(s) – n. a writer, reporter or photographer for a news-gathering organization

accountability – n. a willingness to accept responsibility for one's actions