Update Required To play the media you will need to either update your browser to a recent version or update your Flash plugin.
By George Grow
10 January, 2015


The United Nations says conflicts forced many people from their homes during the first half of 2014. The U.N. refugee agency reported this week that 5.5 million people were forcibly displaced during that six-month period. The agency says these men, women and children added to the record 51.2 million people who were displaced worldwide by the end of 2013. At this rate, U.N. officials fear the number of people forcibly displaced might set another record.

Between January and June of 2014, 1.4 million people fled across international borders, becoming refugees. The rest -- more than 4 million people -- became displaced within their own countries. 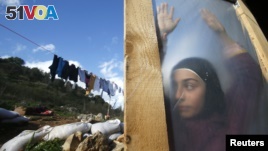 A Syrian refugee girl stands behind a door at a makeshift settlement in the village of Ketermaya, south of Beirut January 8, 2015. (REUTERS/Ali Hashisho)

"Syria has really been the war that's changed everything -- almost 10 million refugees and internally-displaced people as of mid-2014. Those numbers are still rising. One in every four refugees that UNHCR is today dealing with is a Syrian. Syria is what happens when a war won't be stopped and in that region around Syria, where so many refugees are, we're meanwhile seeing that asylum is becoming massively stretched."

The new U.N. report says the world is facing a deadly mix of both new and old conflicts. The report notes relatively new conflicts in places such as Syria, the Central African Republic and South Sudan. It says this unrest is taking place at the same time that old conflicts continue to displace individuals and families.

The UNHCR says there are 2.7 million Afghan refugees worldwide. They represent the largest protracted refugee population under the U.N. agency's care. The report lists the home countries of other big refugee populations. After Syria and Afghanistan, the largest numbers of refugees under the agency's care come from Somalia, Sudan, South Sudan, the Democratic Republic of Congo, Myanmar -- also known as Burma -- and Iraq.

The UNHCR's Adrian Edwards says poor countries and those close to areas of conflict have the hardest time dealing with refugees.

"Relative to their population sizes, Jordan and Lebanon are hosting most refugees -- almost 1.8 million combined. The biggest economic burden though is being felt by other countries -- that's Ethiopia and Pakistan, in particular, which relative to the size of their economies that have more refugees than any other country. Major conflicts and displacement in places such as Central African Republic, South Sudan is also happening. That's in danger of being forgotten by publics and by donors."

Adrian Edwards notes that African conflicts are not limited to African nations alone. He says the humanitarian and economic effects for poor, neighboring countries are huge.

He says some countries are sheltering hundreds of thousands of refugees, yet lack the money and supplies to care for them. He says they often fail to receive the financial support they need from wealthy donor governments.

refugee - n. a person who has been forced to flee because of unjust treatment, danger or war

population – n. all the people in a place, city or country

Now it's your turn to use these words in the news. In the comments section, write a sentence using one of these words and we will provide feedback on your use of vocabulary and grammar.