Update Required To play the media you will need to either update your browser to a recent version or update your Flash plugin.
By Gregory Stachel
01 May 2022


A new United Nations report says the world will experience more disasters in the coming years.

The UN Office for Disaster Risk Reduction released the report. It said if current trends continue, the world will go from around 400 disasters recorded in 2015 to 560 a year by 2030.

The number of extreme heat waves in 2030 will be three times what it was in 2001, the report says. It also predicts there will be 30 percent more droughts, or very dry weather. 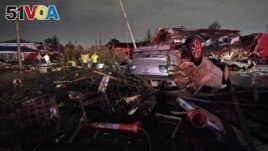 FILE - A car is flipped over after a tornado tore through the area in Arabi, Louisiana on March 22, 2022, in a part of the city that had been heavily damaged by Hurricane Katrina 17 years earlier. (AP Photo/Gerald Herbert, File)

The report says there will not only be a rise in natural disasters driven by climate change. It also expects there to be more economic disasters and food shortages.

Mami Mizutori is chief of the UN Office of Disaster Risk Reduction. She said people do not fully understand how much money disasters are already costing. She added that if people and governments do not get ahead of disasters, there will be a point in which governments cannot deal with the damage from disasters.

That means society needs to rethink how it pays for, deals with and talks about the risk of disasters, the report's writers said.

Mizutori said on Monday about 90 percent of the current spending on disasters is emergency aid. Only six percent of the spending is on rebuilding and four percent is on prevention.

Not every large storm or earthquake has to turn into a disaster, Mizutori said. A lot of damage can be avoided with more planning and prevention efforts.

For many years, disaster deaths were decreasing because of better warnings and prevention, Mizutori said.

But in the last five years, disaster deaths are "way more" compared to the previous five years, said Roger Pulwarty. He is a climate and social scientist at the U.S. National Oceanic and Atmospheric Administration. He is also one of the writers of the report.

Pulwarty said if society changes the way it thinks about risk and prepares for disasters, then the recent increase in yearly disaster deaths could be temporary. If changes are not made, he said, the increase in deaths may continue.

trend – n. a general direction of change: a way of behaving or proceeding that is developing and becoming more common