UN: Opium Grown in Afghanistan Down by 48

Update Required To play the media you will need to either update your browser to a recent version or update your Flash plugin.
By VOA
18 October, 2015


The United Nations Office on Drugs and Crime says the amount of opium produced in Afghanistan has dropped by almost half compared to last year.

Andrey Avetisyan is the UN agency's regional representative. He says Afghanistan produced 3,300 tons of opium this year as compared to 6,400 tons last year. He spoke to reporters on Wednesday in Kabul, the Afghan capital.

Officials say one reason for the sharp drop is better cooperation between law enforcement agencies and Afghan policy makers. They also say less land is being used to grow opium poppy plants. And they say growers are harvesting fewer poppies for every hectare they plant. Opium is a drug made from the dried opium poppy plant. The drug is illegal in many countries. 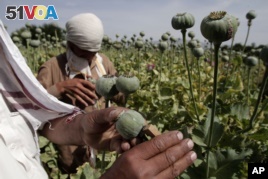 FILE - In this May 10, 2013 file photo, Afghan farmers collect raw opium as they work in a poppy field in Khogyani district of Jalalabad east of Kabul, Afghanistan.

The reported drop in production comes after years of rising production levels in Afghanistan.

Mr. Avetisyan says opium cultivation in 2015 decreased by 19 percent throughout the country. But he says it increased in northern Afghanistan because of a breakdown in security in some places.

More opium is grown in Helmand than in any other province. But production there was reported to be down by 16 percent compared to last year. There were also reductions in nine other areas.

Mr. Avetisyan added that the Afghan drug problem is still serious. He says it can only be solved if the government works closely with the international community.

He says the UN agency hopes Afghanistan will become more secure. He says that will help in the fight against the growth, production, use, transport and export of illegal drugs.

Afghanistan produces more than 80 percent of the opium sold throughout the world. Experts believe money from the drug trade supports Taliban militants in their campaign to oust the Afghan government.

The United States has spent 7.6 billion dollars to help fight the drug trade in Afghanistan since 2001.

Ayaz Gul in Islamabad reported this story for VOANews.com. Christopher Jones-Cruise adapted the story for Learning English. George Grow was the editor.

cultivate – v. to grow and care for (plants)

regional – adj. relating to an area

insecurity – adj. relating to a lack of security

How is your country fighting the growth, transport, use and export of illegal drugs? We want to hear from you. Write to us in the comments section or on 51VOA.COM.