Update Required To play the media you will need to either update your browser to a recent version or update your Flash plugin.
By VOA
19 December, 2015

The 15-nation council will expand a resolution against al-Qaida to the Islamic State group. The group has seized large areas of Syria and Iraq, and it is trying to increase its strength in Libya.

Samantha Power is the U.S. Ambassador to the United Nations. Wednesday, she told reporters "this resolution...will be a new piece of international law."

She said the resolution would require countries to do more to stop the money being sent to terrorists. 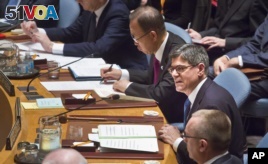 Power says nations have limited the group's funding somewhat. But she says the group still trades cultural objects and smuggles oil. She notes that the group demands money from people who live in the areas the terrorists occupy. But she says "this is a problem that we should be able to solve."

She said if an effort is made to attack the Islamic State group's funding sources and assets "in an intensified and even more aggressive way, that is going to have a material effect on their ability" to carry out attacks.

piece – n. an amount that is cut or separated from a larger section of something

assets – n. something that is owned by a person, company, etc. -- usually plural