UNICEF: Violence Against Children Is Widespread

Update Required To play the media you will need to either update your browser to a recent version or update your Flash plugin.
By Margaret Basheer
14 September, 2014


The United Nations Children's agency, UNICEF, says violence against children is widespread around the world. The UN agency says about 95,000 young people were murdered in 2012, and 120 million girls have experienced sexual violence. It also says the great majority of victims live in poor and middle-income countries.

UNICEF official Geeta Rao Gupta says children are at risk everywhere. She says the danger exists in every economic and social situation, culture, religion and ethnicity. 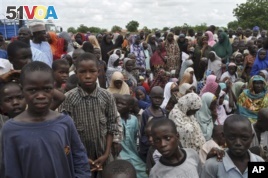 Civilians who fled their homes following an attack by Islamist militants take refuge at a school in Maiduguri, Nigeria, Tuesday, Sept. 9, 2014.

"It takes many forms: physical, sexual, emotional. It occurs in places where children should be safe: their homes, schools and communities. Increasingly it happens over the Internet. And it is perpetrated by family members and teachers, neighbors and strangers and other children."

Violence often starts in the home. Researchers found that parents and caregivers deal out physical punishment to almost one billion children worldwide on a regular basis. They said children also suffer violence at school, with one in three young people saying they suffered bullying – being pushed around or suffering abuse, physically or emotionally. The UN researchers also said 120 million girls under age 20 have been forced to have sex or perform sexual acts.

Such abuse becomes normal and influences thinking. For example, the study found that half of all teenage girls believe it is sometimes all right for a husband to hit his wife.

Homicide – murder – is a leading cause of the death of boys in the adolescent, or teenage, years. Almost one in five of all homicide victims are under age 19.

UNICEF official Claudia Cappa is an expert in statistics. She says that even if one child suffers harm through violence, it is one child too many.

"Violence against children does not only inflict pain and humiliation, it kills children. In 2012 alone, approximately 95,000 children and adolescents under age 20 were killed by homicides.

The report's writers said efforts need to be made to change beliefs about hitting children. They said better methods of discouraging bad behavior ought to be taught to reduce the threat of violence in the home. They said services also should be provided for children who have suffered psychological or physical abuse. And they urged that laws and policies meant to protect children be enacted and enforced.

This report was written by Margaret Basheer and adapted for Learning English by Jeri Watson. George Grow was our editor.

regular - adj., happening over and over again at the same time or in the same way

bullying - adj., continually cruel to others

statistics - n., branch of mathematics dealing with the collection, analysis, interpretation, and presentation of masses of numerical data

humiliation - n., the making of another person to feel foolish or ashamed

discouraging - adj., to try to make people not want to do something; to dishearten