Update Required To play the media you will need to either update your browser to a recent version or update your Flash plugin.
By Bryan Lynn
25 October 2021


The United Nations has warned that Afghanistan is facing a massive food crisis. It urged the international community to act quickly to increase levels of humanitarian aid to help the people.

The director of the U.N.'s World Food Programme (WFP), David Beasley, said millions of Afghans could die of starvation unless immediate action is taken to provide assistance.

Beasley told Reuters an estimated 23 million people currently face severe food insecurity and were "marching to starvation." This compares to 14 million people who were facing the same situation just two months ago.

He added: "I don't know how you don't have millions of people, and especially children, dying at the rate we are going with the lack of funding and the collapsing of the economy." 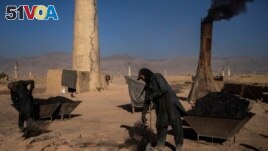 In this Sunday, Sept. 26, 2021 file photo, Afghan laborers work at a brick factory in Deh Sabz, on the outskirts of Kabul, Afghanistan. (AP Photo/Bernat Armangue, File)

Afghanistan's economic situation worsened in August after Taliban fighters drove out the country's Western-backed government and seized power. The Taliban takeover led many international donors to hold back billions of dollars in assistance.

The food crisis has worsened because of the effects of climate change. It was severe even before the Taliban took over the government. Now, the Taliban is blocked from accessing money and property held outside the country by nations still deciding how to deal with the Taliban government.

Beasley said that money already meant for development assistance should be repurposed for humanitarian aid. Some countries have already redirected aid in this way. Beasley added that money frozen by other nations could be released through U.N. agencies. "You've got to unfreeze these funds so people can survive," he said.

U.N. officials have said the World Food Programme needs up to $220 million a month to partly feed the millions of Afghans facing food insecurity as winter nears.

Economic problems have led many Afghans to sell personal belongings to pay for food, Reuters reported. The latest food crisis has hit both cities and rural areas.

Aid groups have urged countries that are concerned about human rights under the Taliban to start negotiations with the new rulers before the situation gets worse. Beasley said a total economic collapse in Afghanistan could create a massive refugee flow similar to the 2015 migration crisis from Syria into Europe.

"I don't think the leaders in the world realize what is coming their way," Beasley said.

When asked about the country's humanitarian crisis, Taliban spokesman Zabihullah Mujahid told Agence France-Presse on Sunday: "We are trying to get our people out of the current situation and help them." He added that "humanitarian aid has also arrived."

Mujahid said the government was attempting to collect and give out necessities to those in need, including food and clothing. He promised, "All worries will be resolved."

Reuters and Agence France-Presse reported on this story. Bryan Lynn adapted the reports for VOA Learning English. Ashley Thompson was the editor.

funding – n. money given by a government or organization for an event or activity

access – n. a way of getting near, at or to something or someone

repurpose – v. to find a new use for an idea, product or building