Unbeknownst and ‘Til in a Taylor Swift Song

Update Required To play the media you will need to either update your browser to a recent version or update your Flash plugin.
By Faith Pirlo
03 November 2022


Two popular singers, Taylor Swift and Lana Del Rey, came out with a song together called Snow on the Beach. The song is about two people falling in love with each other at the same time, which is uncommon — like snow falling on a beach.

In this week's Everyday Grammar, we look closely at this song. While there are many grammatical structures in it, we will look at just two words: "unbeknownst" and "‘til."

Let's listen to parts of Snow on the Beach: 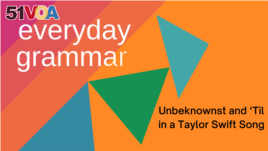 Everyday Grammar: Unbeknownst and ‘Til in a Taylor Swift Song

I saw flecks of what could've been lights
But it might just have been you
Passing by unbeknownst to me...

The word "unbeknownst" is an adjective meaning "not known or existing without knowledge of someone."

"Unbeknownst" sounds very old. It has the suffix "st" which was put on the ends of some words hundreds of years ago. However, "unbeknownst" is a "newer" version of the old adjective "unbeknown."

Today it is more common to hear someone using the adjective "unknown," but from time to time you will hear "unbeknownst," just like in the Taylor Swift song.

So how do we use this adjective?

We mostly use "unbeknownst" with the preposition "to."

Something or someone is "unbeknownst to" someone else.

Here, once again, are the lyrics of Swift's Snow on the Beach.

Everyday Grammar: Unbeknownst and ‘Til in a Taylor Swift Song

I saw flecks of what could've been lights
But it might just have been you
Passing by unbeknownst to me...

We have the structure:

In this part of the song, "unbeknownst to me" as an adjective phrase is actually describing the direct object, the noun of "you."

Let's look at some other examples of how we can use "unbeknownst."

Her mom's wedding dress in the back of the closet was unbeknownst to her.

Here the adjective phrase of "unbeknownst..." is modifying the noun and subject of the sentence "wedding dress."

We can also use "unbeknownst" in the beginning of a sentence:

The word "'til" is a shorter form of "until." We use it in everyday speech, especially when telling time or using dates.

We use "until" for somewhat formal writing. The word "'til" often appears in spoken language and in writing, like in songs or poems.

"Until" and "'til" mean "up to a certain point or event in time." They can be either a preposition or a conjunction, linking two clauses together.

Let us look at how Taylor uses "'til" in Snow on the Beach:

And it's fine to fake it 'til you make it

In all three lines of the song, Swift uses "'til" as a conjunction, linking the first clause to the second.

Remember that a clause is a group of words that contains a subject and a predicate. Clauses do not always contain a complete thought, like a sentence does.

We can take the three other lines and create two additional sentences:

And it's fine to fake it 'til you do.

And it's fine to fake it 'til it's true.

In these sentences, "'til" is still a conjunction, linking the first clause with the second clause to make a complete sentence.

Let us look at some other examples of how "'til" can be used as a preposition.

We can use "'til" just like "until" with points or events in time. Here are some examples.

We have ‘til Friday to get the report done.

Andrew: What time is it?

In the summer, it does not get dark ‘til later in the evening.

Today we looked at two interesting words from the song Snow on the Beach by Taylor Swift and Lana Del Rey, "unbeknownst" and "'til." Both of these words are newer forms of much older words.

"Unbeknownst" is an adjective and is often used with the preposition "to."

"'Til" is the short form of the word "until" and can be used as either a preposition or a conjunction.

Now it's your turn. Have you heard or tried to use these words before? Do you know any other words with similar meanings or usages?

Let us know in the comments!

fake – v. to make (something) seem real or true in an effort to trick someone

conjunction – n. grammar : a word that joins together sentences, clauses, phrases, or words

clause – n. (grammar) a part of a sentence that has its own subject and verb