Update Required To play the media you will need to either update your browser to a recent version or update your Flash plugin.
By Anne B
18 January, 2017


With a new U.S. president coming Friday, changes in foreign policies and aid will likely follow. What those changes will be are not yet fully known.

But overseas aid will come under question from a president and a secretary of state known to follow the bottom line as businessmen. In business, the bottom line is a company's profit, or loss. 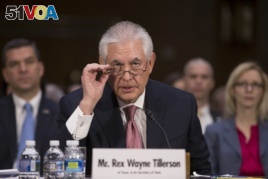 Secretary of State-designate Rex Tillerson testifies on Capitol Hill in Washington, Jan. 11, 2017, at his confirmation hearing before the Senate Foreign Relations Committee.

Rex Tillerson is the Secretary of State nominee. In his confirmation hearing, U.S. Senators asked the former head of Exxon-Mobil how to prevent U.S. assistance from being stolen by corrupt foreign countries. He said:

"If we're going to deliver aid into a country where we know this is a risk, what can we do in the execution of the delivery of that aid?"

It is likely that President-elect Donald Trump and his administration will be giving foreign aid to countries to improve property rights, the rule of law, and to fight corruption.

James Roberts is with the Heritage Foundation in Washington, D.C.

"Too much of the foreign aid given by the Western countries -- U.S., OECD countries -- has ended up only securing in power corrupt regimes."

Republicans now control the White House and both houses of Congress. This means that some programs opposed by religious conservatives could face review, and maybe be cut, or completely ended.

Amanda Glassman is with the Center for Global Development in Washington, D.C.

The United States is the biggest global donor. And John Kerry, the outgoing secretary of state, says the U.S. needs to do even more than the current spending of $34 billion for this year.

Kerry is calling for a new "Marshall Plan" like the one that helped rebuild Europe after World War Two. He wants the plan to make sure there is education for young people at risk of becoming followers of Muslim fundamentalists.

"There are about a billion and a half children in the world under the age of 15. Somewhere upwards of 400 million of them will not go to school, and that is a problem for all of us."

Throughout American history, diplomacy, development and foreign aid have had strong support from both political parties. U.S. diplomats hope that the Trump administration will also see overseas assistance as important for America's security and economic interests.

Steve Herman wrote this story for VOA. Anne Ball adapted this story for Learning English. Hai Do was the editor. We want to hear from you. Write to us in the Comments Section and visit us on 51VOA.COM.

family planning – n. use of birth control to determine the number of children there will be in a family and when they will be born