Understanding Context Is Important for International Students in US

Update Required To play the media you will need to either update your browser to a recent version or update your Flash plugin.
By Andrew Smith
24 September 2022


International students in the United States need to understand context and culture if they want to succeed in their studies, experts say.

Understanding context means knowing the situation in which something happens and words that are being used in the specific situation.

Dr. Susan Barone is the Director of the English Language Center at Vanderbilt University in Nashville, Tennessee. The Center provides English-language training for international students. 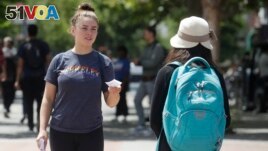 To explain how understanding context and culture relate to academic success, Barone talked about the word participation.

Dr. Barone said, "it's such a relative term. It's relative to each instructor. Each student will have their own understanding of what that means. How do they read the specific context for what the participation expectation is?"

Preparation for study in the U.S.

So, what can international students do to better prepare before they arrive in the U.S.?

Knowing their abilities, students can look for help once they are in the U.S. Support services exist at both large public universities and smaller, private colleges. Since large public universities usually have more international students, it can be more difficult for them to provide individualized training, such as tutoring, to all international students.

Barone added that international students should also learn vocabulary, expressions and writing that are common in their field of study. For example, engineering students would communicate differently than those who study literature. Similarly, daily conversations involving sports or food will have their common language.

Josh Teaster is the Acting Director of the Admissions Office of Oberlin College and Conservatory in the state of Ohio. He said the school has provided general English-language support for its international students for many years. Recently, it has added support for English commonly used in music. He says this helps students succeed in their music studies and performance.

But providing language training for international students is not the only way universities help them.

Purdue University is a large state university in Indiana with 50,000 students, and 22 percent of them are international. One way the university attempts to help international students is to provide intercultural training for students in the U.S. For example, Purdue provides online training to help American students better understand accents from people around the world.

Annette Benson works at Purdue's Center for Intercultural Learning, Mentorship, Assessment and Research. In an email to Voice of America, she wrote that all students "are expected to hone their listening skills" to help them understand different accents. That way, international students are not the only group responsible for helping people understand them, Benson explained.

Dr. Lan Jin is an intercultural research specialist at Purdue. She is Korean-Chinese and has been living in both China and the U.S. Before working at Purdue, she was an international student there.

Jin noted that in the U.S., students can meet individually with professors and talk to them about any difficulties they are having with their studies. This is different than in some cultures where it is more difficult for students to meet with professors.

American colleges and universities also provide counseling for students, including web-based counseling services. Jin explained that this is sometimes a good choice for international students who worry about being negatively judged when they look for mental health counseling.

Jin advised international students to immerse, or deeply involve, themselves in local culture. Jin said: "There are tons of opportunities and resources available in US universities. Go explore, engage, and enjoy. Remember that this time in your life represents a real opportunity. Make the most of it."

Barone from Vanderbilt said that students benefit when they have an open attitude. Being open means being more likely to try new things and speak with a variety of people. In this way, she said, "the entire context becomes their classroom. From the moment they are immersed, there's opportunity to learn".

context -n. all the details and especially the cultural aspects of a situation

specific -adj. relating to a precise, limited thing, fact, or idea; the opposite of general; for example, the address of a house or building gives the specific location

relative -adj. relating to different perspectives or positions, not being the same for every person. Judged in comparison with other things. For example, 15 degrees Celsius may feel cold to one person but not to another person.

instructor -n. a general term for someone who teaches, either in schools or in other situations

idiomatic -adj. referring to expressions, usually small groups of two or three words, that have different meaning when grouped together than the individual words themselves. The expressions are often used in conversational language of native speakers. For example, He got up on the wrong side of the bed is an idiom which means the person is in a bad mood.

accent -n. the way a person pronounces a language, based upon the region, country, and family background they come from.

mentor/mentorship -n. someone who gives guidance to another person, usually when training and teaching that person for an extended period of time. For example, teachers with many years of experience will mentor new, inexperienced teachers. Mentorship is the act of mentoring.

hone -v. to improve one's ability, usually referring to a skill. For example, "The tennis player honed her skill by years of practice."

counseling -n. advice and help given from one person to another, usually in a professional way. The word counseling by itself usually means help for mental health. But there are other types of counseling such as financial counseling, legal counseling, and the like.

negatively -adj. badly, not in a good manner

engage -v. to interact with something or someone, such as having a conversation with someone or attending a social event