Update Required To play the media you will need to either update your browser to a recent version or update your Flash plugin.
By Adam Brock
06 December, 2014

Minh Tran is EF's Director of Research and Academic Partnerships.

The English Proficiency Index says Denmark is the top country for English as a foreign language. Poland and Austria have joined Denmark and other northern European countries with the "very high proficiency" ranking. 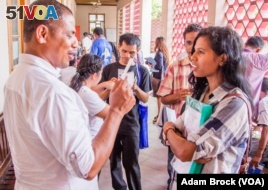 South Korea, Japan, Taiwan, and Hong Kong have invested a lot of time and money in English education. But these countries have not improved since the last study came out in 2007.

Minh Tran has this to say: "I think they are not improving because they have not made any significant reform to the way they teach English. In Korea, Japan, Taiwan, Hong Kong. They still rely quite heavily on rote memory. And there's a strong focus on grammar and vocabulary acquisition, but not so much on the actual communicative skills."

English language proficiency has actually fallen in many countries in the Middle East and North Africa, partly because of wars in the area.

For its report, EF used online test results from 750,000 adults in 63 countries. The test takers were adults who chose to take the company's online test. They were not a random sample of the total population. For that reason, the results might be biased toward people who are interested in English and use the Internet.

Dr. Clive Roberts is the Director of Assessment, Analysis & Research at ELS Educational Services. He does not know about the report's research methods, but he thinks the study is helpful.

"...Conducting such research enables countries, regions, organizations to sort of assess their own position relative to other places. What trends are happening..., then they can sort of re-assess their own situation and figure out a strategy."

Improvements have also been noted on average scores for the TOEFL, the Test of English as a Foreign Language, and IELTS, the International English Language Testing System. 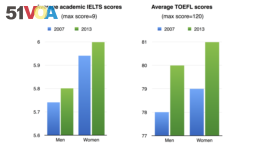 Eileen Tyson is Executive Director of Global Client Relations at the Educational Testing Service. ETS produces the TOEFL. Ms. Tyson agrees that English proficiency is rising worldwide. Average TOEFL scores have risen by two points in the past nine years. But she thinks it is not wise to compare countries by average TOEFL scores. She says many things can influence test results.

"For example, the age at which students start to learn English. ...Some native languages are closer to English...How many hours per week a student spends learning English, and what kind of curriculum they use. So all of these combine ...we feel strongly that you really can't use TOEFL scores for comparing general proficiency across countries."

In 2005, ETS made big changes to the TOEFL. It went from a paper test to a test that required use of a computer and an Internet connection. Notably, ETS cut the grammar section and required test takers to record spoken responses to questions.

The British Council estimates that 1.75 billion people speak English today. The group expects that number to grow to two billion by 2020 -- about one-fourth of the world's population.

You can see the full English Proficiency Index report at http://www.ef.edu/epi/

This story was written and produced by Adam Brock. It was edited by Hai Do and George Grow.

proficiency - n. the state of being good at something

rote – n. mechanical or unthinking routine or repetition; the use of memory with little intelligence

random sample – n. a sample in which every person in the population has an equal chance of being chosen

bias – n. to have a strong and often unfair influence on (someone or something)

Now it's your turn. How did your country do in the English Proficiency Index? Do you agree with your country's ranking?