Update Required To play the media you will need to either update your browser to a recent version or update your Flash plugin.
By Bryan Lynn
30 May 2022


Researchers are using an underwater drone to measure carbon dioxide (CO2) levels in the ocean. It is believed to be the first time such a vehicle has been used specifically to test CO2 levels.

The vehicle, which the team also calls a glider, is designed to dive down to 1,000 meters in deep ocean areas and can operate for weeks at a time.

The goal of the research is to provide scientists with data about how climate change is affecting the ocean's chemistry. The self-swimming drone was deployed in the Gulf of Alaska this spring. Reporters from The Associated Press recently joined researchers on a boat in Alaska's Resurrection Bay to see the drone in action. 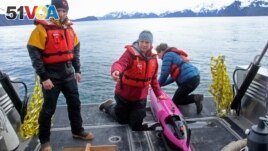 This May 4, 2022, photo shows oceanographers Andrew McDonnell, left, and Claudine Hauri, middle, along with engineer Joran Kemme after an underwater glider was pulled aboard the University of Alaska Fairbanks research vessel Nanuq from the Gulf of Alaska.

The team says the project could be a major step forward in measuring the environmental health of oceans. The scientists are most interested in levels of ocean acidification. This happens when CO2 emissions in the atmosphere make their way into the ocean. Ocean acidification can harm or kill some kinds of sea life.

In a way, oceans have done humans a big favor by taking in some of the CO2. If this were not the case, there would be much more CO2 in the atmosphere. This would trap more of the sun's heat and further warm the Earth.

"But the problem is now that the ocean is changing its chemistry because of this uptake," said team member Claudine Hauri. She is an oceanographer with the International Arctic Research Center at the University of Alaska Fairbanks.

One of the best ways to measure ocean acidification is to collect CO2 measurements. Until now, these collections were mostly done from ships or with floating devices at the ocean surface or equipment on the ocean floor.

Hauri is working with another researcher, Andrew McDonnell, on the project. He is an oceanographer with the College of Fisheries and Ocean Sciences at the university.

The two – who are married – teamed up in recent months with engineers from Cyprus Subsea Consulting and Services, which provided the drone. A German company, 4H-Jena, supplied the CO2 sensor. The team repeatedly took the drone farther and farther into Resurrection Bay from the coastal community of Seward to carry out the tests.

Researchers said the drone's sensor is like a very small laboratory. It examines CO2 data and stores it inside a temperature-controlled system.

Richard Feely is a scientist with the U.S. National Oceanic and Atmospheric Administration (NOAA). He is stationed at the agency's Pacific Marine Environmental Laboratory in Seattle, Washington.

Feely said the goal of the project is to make the measurements collected by the glider just as accurate as those carried out on ships.

Researchers in Canada have also tested a smaller, CO2 measuring device attached to a drone. But that sensor has not yet met effective targets for ocean acidification observations.

McDonnell said his goal is to one day have a large number of similar robotic gliders operating in oceans across the world. Such efforts will be important in helping scientists "understand much more about what's going on in the ocean than we have before," he said.

Bryan Lynn wrote this story, based on reports from the University of Utah Health, Nature Chemical Biology and NOAA.

glider – n. an aircraft that has no engine and flies on air currents

emission – n. the act of releasing something

global warming – n. the increase of temperatures around the world as a result of pollution

uptake – n. the taking in of a substance