Update Required To play the media you will need to either update your browser to a recent version or update your Flash plugin.
By Alice Bryant
30 November, 2018

Reggae music began in Jamaica and spread across the world with its calls for social justice, peace and love.

Born in the neighborhoods of Kingston in the 1960s, reggae songs were an expression of hard times and struggle. But its rhythmic sound and hopeful lyrics also made it an enjoyable music. 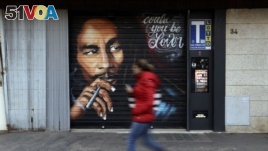 Its most famous songwriter and performer, the late Bob Marley, became an international star with songs like "No Woman, No Cry" and "Get Up, Stand Up." Other well-loved reggae artists include Jimmy Cliff and Toots and the Maytalls.

Over time, the music traveled everywhere, from Britain and the United States to Latin America and Africa.

In the 1960s, reggae gained popularity in Britain and parts of the U.S., where Jamaicans began moving after World War Two.

Many of the world's most famous reggae musicians began their careers in Britain. Reggae also influenced other styles of music there.

British artists such as The Clash and The Police mixed reggae's rhythms and sounds, as well as its political messages, into their music. This helped bring reggae to a wider audience.

Today, musicians from a wide field of styles, such as pop, R&B and even jazz, continue to borrow from reggae.

UNESCO said in a statement that reggae remains unchanged as "a vehicle of social commentary, as a cathartic experience, and means of praising God...and the music continues to provide a voice for all."

There are now more than 300 cultural treasures on UNESCO's list.

Along with reggae, the Paris-based agency added five other cultural traditions to its list this week. They include As-Samer, a traditional style of dancing and singing performed at weddings in many parts of Jordan.

Alice Bryant wrote this story based on a story from Reuters news agency with additional information from UNESCO and other sources.

Songs Used:
Bob Marley - "Get Up, Stand Up"
Bob Marley - "Buffalo Soldier"
The Clash - "Police and Thieves" - a remake of a song by Jamaican singer Junior Murvin

rhythmic – adj. having a regular repeated pattern of sounds or movements

lyric – n. the words of a song