Update Required To play the media you will need to either update your browser to a recent version or update your Flash plugin.
By VOA
17 October, 2012

From VOA Learning English, this is the Education Report in Special English.

A new United Nations report says over two hundred million young people in developing countries have not completed primary school. The UN says almost one hundred thirty million are in school. But they cannot read or write -- skills they need to escape from poverty. The report urges donors and governments to support ways for young people to get the skills they need for success.

The findings are from the Education for All Global Monitoring Report by UNESCO -- the UN Educational, Scientific and Cultural Organization. 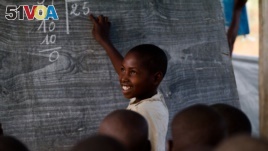 A young boy at the Mugosi Primary School, which mainly serves children from the Kahe refugee camp in the Democratic Republic of the Congo
Educators say young people need at least a primary school education and some secondary school to get secure, good-paying jobs. But the report says that is not happening in most developing countries, including ones south of the Sahara Desert. It says about thirty three percent of young people in sub-Saharan Africa fail to complete the first few years of schooling. Millions more do not even go to secondary school.

Pauline Rose is the director of the Education for All Global Monitoring Report. She says some schools are failing to provide a bridge between school and work. She says this means that one in eight young people are unemployed. And one in four people earns very low wages.

Ms. Rose says young people need strong skills in numeracy and the ability to read and write. She says knowing how to solve problems is more important than learning by rote, a process of establishing something in memory by repeating it.

She says some groups are successful in teaching the skills necessary to operate a business.

PAULINE ROSE: "Non-governmental organizations have been working to provide young people with training that gives them skills in managing their finances, in understanding how to use assets whether it's animals, cows for example, or other types of assets... "

Pauline Rose says people who leave school need a second chance to get an education. In some areas, distance education – by television, computer or other methods – is helpful.

She says another popular method is the traditional apprenticeship. Young people serve as apprentices, receiving training from skilled workers.

Pauline Rose says apprenticeships mainly help people who have had some primary school, but who lack job skills. She says the system can be organized so women are included, and that students are recognized for their work.