Update Required To play the media you will need to either update your browser to a recent version or update your Flash plugin.
By Lisa Schlein
19 July, 2015


The United Nations reported this month that the number of refugees fleeing conflict in Syria has reached four million. The UN's High Commissioner for Refugees says that makes Syria the world's biggest refugee crisis in a generation. Without a settlement to the conflict, it warns, the number of refugees is expected to rise to four-point-25 million by the end of the year.

The UN's High Commissioner for Refugees reported that more than 24,000 Syrians fled to Turkey last month. Already Turkey is home to the largest number of refugees of any country in the world. Nearly half of all the four million Syrians who fled their country now live in Turkey. Most of the rest live in Jordan, Lebanon, Iraq or Egypt.

UN spokesman Adrian Edwards told VOA that conditions for the Syrian refugees in Turkey and the other countries are getting worse. He says that rising numbers of refugees are falling into poverty. He says more of them are really worried about the future. 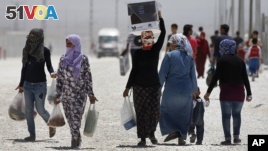 "We are seeing a growing trend in what we call negative coping - that is, child labor, begging, child marriages and worse. If you look at the various countries these populations are in, 86 percent of the refugees in Jordan living outside camps are below the poverty line; 55 percent in Lebanon are living in sub-standard shelter. There is a huge and growing funding crunch."

Adrian Edwards says the world will need about $5.5 billion in international humanitarian and development aid this year. But only one fourth of that amount has been received. He says the lack of money is putting pressure on the refugees, and the communities where they live. Mr. Edwards says aid groups will have to make cuts in refugee programs because the money to support them is not available. He warns that could mean serious and long-lasting problems for the refugees.

"Programs, which are incredibly important in the long run, such as education of children, such as health, such as other things—these go by the way and these have long-term consequences. When you have millions of children unable to go to school, unable to get the proper help they need... the risk is you run into a lost generation of people."

Mr. Edwards says many refugees see no possibility of returning to Syria anytime soon. One result is that many refugees are moving toward Europe and even farther away from their homes. He says desperation is making many of the people risk their lives as they cross the Mediterranean Sea. There, they hope to find work and a new life.

Lisa Schlein reported and wrote this story for VOA News. Anne Ball adapted it for VOA Learning English. George Grow was the editor.

generation – n. a group of people born and living at about the same time; usually 20-30 years

consequence(s) – n. something that happens as a result of an action or set of conditions

desperation – n. a strong feeling of fear, sadness and/or the loss of hope