Update Required To play the media you will need to either update your browser to a recent version or update your Flash plugin.
By VOA
30 August, 2014


The United Nations Children's Fund – UNICEF – says August has been its busiest month for emergency airlifts in the past 10 years. The U.N. agency has been sending needed supplies on airplanes to humanitarian crises in not one, but several areas. Shanelle Hall is director of UNICEF's Fund Supply Division. Her office is in Copenhagen, Denmark.

"For us, there's been massive need and that's required a massive response. Many of them have come together at the same time, hitting us in this month of August."

The airlifts have brought food, medicines and other supplies to eight countries and one territory.

"Central African Republic, Palestine, Liberia, Iraq, South Sudan and Syria, including the neighboring countries where Syrian kids are, so Lebanon and Jordan, as well."

Ms. Hall says airlifts are much more costly to operate than transporting supplies by truck. 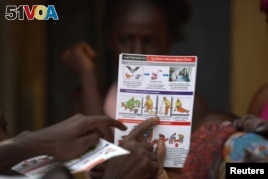 A UNICEF worker shares information on Ebola and best practices to help prevent its spread with residents of the Matam neighborhood of Conakry, Guinea in this handout photo courtesy of UNICEF taken Aug. 20, 2014.

"Usually we resort to airlifting cargo really on the onset of an increase in need. So we call it our rapid response. When the need to so acute that we need to rapidly get supplies in – when supplies that may be already in-country or were pre-positioned are starting to be exhausted.

As of August 25th, UNICEF had carried out 36 emergency airlifts, carrying over 1,200 metric tons. Some of the supplies going to Syria and Iraq are designed to help children deal with the effects of conflict.

"We're shipping what we call early childhood development kits and recreation kits to give to kids to start, if you will, their psycho-social care. They're displaced. They're in camps or other places where they're settling and they still have some way of expressing themselves through play or through sport."

UNICEF not only organizes airlifts because of conflict situations. The U.N. agency has begun airlifting supplies to Liberia for use against the disease Ebola. Shanelle Hall says it is all part of a team effort. She says UNICEF works closely with governments and non-governmental organizations in the affected areas.