Update Required To play the media you will need to either update your browser to a recent version or update your Flash plugin.
By Dan Friedell
18 April, 2017

A unicorn is an imaginary animal that looks like a horse. It has one straight horn growing from the middle of its head. It is a magical beast, and thought to have special powers.

But does a unicorn drink coffee? If you ask the American coffee company Starbucks, the answer is yes. 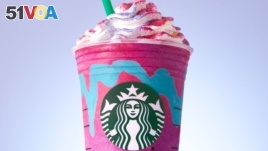 The Unicorn Frappucino will be available in the U.S., Canada and Mexico for five days.

But not just any coffee.

Beginning this week, Starbucks customers will see a "Unicorn Frappucino" drink on the menu. A "Frappucino" – or "Frap" for short -- is a kind of mixed Starbucks coffee drink that is served cold.

The Unicorn Frap will be on menus for five days.

It is what a unicorn probably would order if it walked into a Starbucks, of course. It is very colorful, and looks and tastes nothing like coffee.

Unicorns are described in many ancient books. They were thought to be impossible to catch, which is why no one had ever seen one. And, in modern culture, unicorns appear in movies, animated television shows and in many children's [toy] stores.

These days, unicorns are often represented in a very colorful way. Their bodies may be white, but their tails or horns have many colors.

That may explain why the Unicorn Frappucino is so colorful and sweet.

Some commenters say the drink has actually already been available at Starbucks on a "secret" menu. You just had to know to ask for it.

For a short time, though, it will be on the public menu.

To make the Unicorn Frappucino, baristas start with one of Starbucks' normal creamy, cold non-coffee drinks. But then the colors come in.

Some people on social media say they cannot wait to try the new creation.

But one person who has already tried it called it "a hot mess with a cute appearance."

And another person wrote that the drink is "offensive to unicorns."

The drink will be available in the United States, Canada and Mexico.

Dan Friedell adapted this story for Learning English based on reports from the Associated Press and other news services. Ashley Thompson was the editor.

Would you try the Unicorn Frappucino? We want to know. Write to us in the Comments Section or on 51VOA.COM.

menu – n. a list of the foods that may be ordered at a restaurant

horn – n. one of the hard pointed parts that grows on the head of some animals (such as cattle, goats, or sheep)

animate – v. to make (something, such as a drawing) appear to move by creating a series of drawings, pictures, etc., and showing them quickly one after another

syrup – n. a sweet, thick liquid made from the juice of a fruit or plant

drizzle – v. to pour a small amount of liquid onto or over something

hot mess – slang expression. someone or something that is very unsuccessful and disordered