Update Required To play the media you will need to either update your browser to a recent version or update your Flash plugin.
By Phil Dierking
19 December, 2016


The United Nations Security Council has approved a resolution urging the immediate deployment of U.N. monitors to the eastern part of the Syrian city of Aleppo. Syrian rebels had controlled that area for about four years.

France said it is very important to have observers in the area to avoid "mass atrocities" by Syrian forces and militias.

The resolution calls for the U.N. and other groups to monitor evacuations from eastern Aleppo. It also calls for U.N. Secretary-General Ban Ki-moon to talk with Syria and other parties on security and preparations for the monitors' deployment. Ban's term as secretary-general ends December 31.

France and Russia drafted the resolution. It asks all parties to allow immediate access for humanitarian aid and medical care, without conditions. It also asks parties to respect and protect all civilians across Aleppo and throughout Syria.

The evacuation of Aleppo began last week after Turkey and Russia negotiated a cease-fire with government forces. The Syrian forces were about to attack the rebels' last base in the country's largest city.

Now, evacuations are continuing from the last rebel-held areas of Aleppo and two villages Foua and Kefraya.

Thousands of people are still in eastern Aleppo. Rebels took control of the area in 2012. Recently they lost nearly all of their territory during an offensive by government troops. 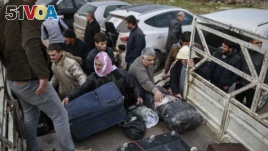 Syrians put their belongings into vehicles after crossing into Turkey at the Cilvegozu border gate with Syria, near Hatay, southeastern Turkey, Dec. 18, 2016.

On Monday, the U.N. Children's Fund (UNICEF) said that 47 children have been evacuated from an orphanage in Aleppo. They are now safe although some are in critical condition.

Agency spokeswoman Malene Jensen says that the agency and its partners are feeding the children, as well as giving them clothes and medical care.

UNICEF warned that many other "vulnerable children'' are still in eastern Aleppo.

The head of the humanitarian group the Syrian Observatory for Human Rights, Rami Abdul-Rahman, said he expected the Aleppo evacuations to be completed late Monday.

The evacuations are said to involve very complicated negotiations between many parties. The parties include rebel groups opposed to Syrian President Bashar al-Assad, and Iranian, Russian and Syrian commanders. Others involved are the militant group Hezbollah, and the Lebanese Shi'ite movement.

Free Syrian Army legal adviser Osama Abo Zaid says the negotiators for the Aleppo evacuations are the Russians and the rebels. However, any evacuations from the towns Foua and Kefraya are discussed between Syrian rebel groups and Iranian Revolutionary Guard commanders. The commanders send the discussions to Hezbollah fighters.

The Free Syrian Army is supported by the United States and countries in the Persian Gulf area.

Osama Abo Zaid said the humanitarian situation is very serious in eastern Aleppo. A large number of people are sleeping outdoors while waiting to be evacuated.

He said there is a lack of medics and doctors. There are only three doctors and one field hospital operating. This means the evacuated people who arrive in western Aleppo need urgent medical care, shelter, and food.

Opposition leaders and activists say that more than 70 percent of the buildings in western Aleppo have been destroyed. There is also a severe shortage of food and medical supplies.

This story was originally written for VOANews. Phil Dierking adapted his report for VOA Learning English. He also used information from other media. Mario Ritter was the editor.

What do you think of the evacuation in Aleppo? We want to hear from you. Write to us in the Comments Section or on Facebook page.

evacuation – n. to remove someone from a dangerous place

monitor – n. a person who has the job of checking or watching some activity or behavior