Update Required To play the media you will need to either update your browser to a recent version or update your Flash plugin.
By Dan Friedell
26 November 2022

Just over one week ago, three football players at the University of Virginia were killed when they were shot by a former teammate. 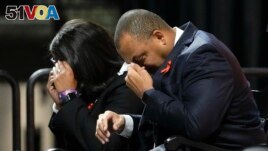 In both cases, university leaders needed to make a plan to support the teammates and friends of the students who died.

Sherard Clinksdale is the director of athletics, or sports at Indiana State. He had to find ways to help the students work through their sadness. He also had the difficult job of telling the football coach and the parents of the students that their children had died.

"There is no playbook for something like this," Clinksdale said.

At the University of Virginia, Carla Williams has the top athletic job. When the news came out that the students were killed on November 14, the university canceled classes and other school activities for two days. The school did not play its next football game, either.

Mental health professionals and dogs trained to offer comfort were made available to students. Williams said it was important to make counselors available for all students, not only the ones who were part of the sports team.

But in 2021, a survey of college athletes found that only 53 percent of those questioned thought their coaches took mental health seriously.

The National Collegiate Athletic Association, or NCAA, oversees college sports in the U.S. It does not have the power to make colleges change their mental health policies. But it does offer tools the schools can use to help students.

Sunday Henry is a doctor who works with students at Washington State University. She helped the football team there deal with the deaths of players in 2018 and 2019. Henry said the first part of the plan is to bring together all of the team members to tell them what happened and the ways they can get help.

She said she thinks college football coaches are getting better at urging their athletes to get mental health help. In the past, some players and coaches believed getting help was a sign of weakness.

Henry also said the athletic trainers are usually the best at noticing athletes who are having problems. The trainers spend a lot of time with the students who are recovering from injuries.

Tony Elliott is the University of Virginia football coach. He said he wanted to support his players. He added, "Nothing can prepare you for this situation."

Bryan Blair is the athletic director at the University of Toledo in Ohio. He worked in sports at Washington State University when the players there died. Blair said many of the adults in the sports department took a class called Mental Health First Aid.

He said the adults who work in college sports who often have contact with students should "be a resource to the student athletes."

Curt Mallory is the football coach at Indiana State. He said he makes time each Monday to meet with his student athletes, even if it seems like they are doing okay.

At California's San Jose State University, coaches had to react to the death of a player who was hit by a bus in October. The next football game was postponed. The football coaches worked to help the student's family and plan a memorial.

The following week, the school played its game, and won. The player who died, Camdan McWright, was honored during a special ceremony. His family was there to see the memorial.

Jeff Konya is the school's athletic director. He watched over the sports teams that week. He has worked in college sports for 36 years. In that time, he said, college sports leaders have gotten better at prioritizing mental health.

"We are in a better position now," he said. He noted, however, that things still can go wrong. "It is not foolproof," Konya said.

coach–n. a person who trains or teaches an athlete

playbook –n. a book that contains sports plays but in this case a guide of best practices and ideas

counselor –n. a person who is trained to help people struggling with problems or concerns

comfort –n. a state of feeling less worried or upset during a time of emotional pain

survey –n. an activity where a number of people are asked questions in order to gather information about what most people think about something

trainer–n. a person who helps heal or prepare athletes for sports

prioritize –v. to make something the most important or first thing in a series of activities

foolproof –adj. something that is difficult to get wrong