Update Required To play the media you will need to either update your browser to a recent version or update your Flash plugin.
By VOA
22 May, 2017


State universities in California are planning to limit admission of undergraduate students from other states and from overseas.

The decision follows release of a report by the state's auditor, Elaine Howle. She found qualified California residents were being denied admission to California state universities because of the acceptance of many non-state residents.

Under the new policy, enrollment of non-California residents will be limited to 18 percent at five University of California campuses. Those campuses are: Santa Barbara, Davis, Santa Cruz, Riverside and Merced.

Emotional Debate at Board Meeting

There was emotional debate at Thursday's Board of Regents meeting as a majority of members voted to limit out-of-state residents.

Board member Hadi Makarechian was once an international student. He moved to California from Iran in the 1960s.

Makarechian told the board he fears the new limits will lead gifted international students to look elsewhere for college.

"I know the ‘in thing' today is to build walls, but we are building a wall around the University of California by doing this," he said.

But University of California President Janet Napolitano said the new limit on out-of-state residents is a "balanced" decision.

Napolitano said the policy supports "our pledge that non-resident students will be enrolled only in addition to, and never in place of, Californians." But it still provides opportunities for students from around the world, she said. 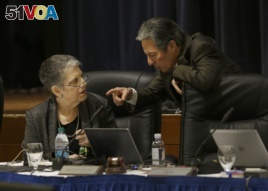 University of California President Janet Napolitano, left, talks with regent Hadi Makarechian at a Board of Regents meeting.

The state university system in California is one of the largest in the world. It serves about 210,000 undergraduate students. About 16.5 percent of them are from outside California.

About 10.9 percent of non-California undergraduates are international students. They come from about 100 countries.

There are financial reasons for the acceptance of so many non-state residents.California state universities receive about $61,000 a year from non-state residents, compared to about $34,000 per student for in-state students. That is a difference of about $27,000.

In March, UCLA Chancellor Gene Block told the board that extra tuition from non-state residents helped his university avoid cuts and add some courses, even as state education spending dropped.

But, as the Regents met last week, its members were mindful of another issue. The California state government had been holding up $18.5 million in aid to the state's universities until the board moved to reduce non-state admissions.

Assemblyman Kevin McCarty had led the move to hold up the financing. He said lawmakers have been hearing from parents who say their children were being denied admission to state universities in favor of out-of-state students with "lower academic scores."

Competition for admission at California universities is intense.

UCLA received 102,000 applications for the 2017 freshman class, the school reported. It is the first time that over 100,000 students asked to be admitted.

Of the 17,500 accepted, 6,546 were enrolled at the Los Angeles university. About 25 percent were from outside California.

qualified - adj. meeting all requirements for a position

enrollment - n. number of students enrolled at a school

campus - n. the area and buildings around a university

opportunity - n. a chance to do or accomplish something