University of California Will No Longer Require SAT or ACT

Update Required To play the media you will need to either update your browser to a recent version or update your Flash plugin.
By Dan Friedell
04 December 2021


The University of California system will continue not to require widely-used tests to decide which students it will accept.

The nine University of California schools that accept undergraduates will not use the SAT and ACT standardized tests and has no plans to require them in the future. A standardized test is an examination that is given to a large number of people to compare their abilities.

There are over 200,000 undergraduate students within the University of California system. An undergraduate is a student who is working toward their first college degree. 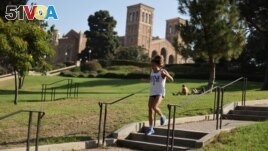 The University of California system is run by a Board of Regents. Most are appointed by the state's governor. In mid-November, the Board of Regents said it was not able to find a good replacement for the SAT or ACT tests. The group said there would not be a new test anytime soon.

Standardized tests have become a subject of debate and legal action in recent years. Part of the dispute has been caused by the COVID-19 pandemic. Many universities decided it would be up to students if they wanted to send test scores with their applications. They are known as "test-optional" schools, meaning the test scores are not required. One of the most well-known schools in this group is the University of Chicago.

Critics say the traditional standardized tests do not predict how well students will do in college. In addition, they say some businesses created costly test preparation classes that not every student can pay for. As a result, they say rich students, especially those who are white or Asian, are in a better position.

Supporters of the tests say they help some students who have trouble getting good grades in high school show that they can be good college students. They worry that removing the tests could keep those students from going to good colleges.

Two years ago, a group that included the Compton Unified School District in California, brought legal action against the University of California system. It called for the universities to remove the test requirement. Compton has many Black and Hispanic students who do not apply to competitive colleges.

In May 2021, the University reached an agreement with the groups that brought the case. It said it would stop using the SAT and ACT for the four years ending in 2025. It also agreed to pay over $1 million in legal costs.

The University of California then decided to study whether the tests permitted the school to bring in a group of diverse and able students each year. Their study showed that standardized tests aid in predicting student performance including their grades. However, the university decided to change its test policies anyway.

Over the last year, the study group considered using a test that is given to 11th grade students in California public schools called Smarter Balanced. The idea was to replace the SAT and ACT. Mary Gauvain, a professor at the University of California-Riverside, was one of the group leaders. At the recent meeting, she said the new test would provide only "modest" value beyond high school grades in predicting how a student would perform in college.

In addition, she said the professors in the study group worried that adding "high stakes" to the Smarter Balanced test would lead to companies creating new, costly test-preparation classes.

Michael Brown is a leader of the University of California system, called the provost. He announced the final decision: "UC will continue to practice test-free admission now and into the future."

Jeremy Bauer-Wolf is a reporter for HigherEdDive, a website that covers higher education in the U.S. He said he thinks they will.

"Higher education is very much a case of follow the leader," he said. "Colleges don't necessarily always want to act unless they see their peers doing the same thing."

"The U.C. system very publicly doing away with these tests will reverberate, especially through California. But you know, [also through] other institutions that might be looked at as competitive."

Bauer-Wolf said universities throughout the U.S. have been evaluating test-optional admissions during the pandemic. However, he thinks those policies may soon become permanent. Test-optional, he notes, is different from removing tests from a student's application.

A study released earlier this year looked at test-optional admissions starting in 2005. It found schools that made the change did see an increase in first-time minority and women students.

Once more schools follow California and drop the test requirement, fewer students will take the tests. That will hurt the companies that produce the tests, Bauer-Wolf said.

"That's something to closely watch," he said.

Would you be more interested in applying to one of the University of California schools now that the SAT or ACT will not be required? Tell us in the Comments section and visit 51VOA.COM.

application –n. a formal, written request for something

modest – adj. not very large in size or amount

high stakes – adj. related to something (such as money) that you could win or lose in a game or competition

practice – v. to do (something) regularly or constantly as an ordinary part of your life

peer – n. a person (or group) who belongs to the same age group or social group as someone else

reverberate – v. to make a sound again and again; when something is repeated many times as a result of some action