Update Required To play the media you will need to either update your browser to a recent version or update your Flash plugin.
By Dr. Jill Robbins
18 September, 2015


One fish, two fish, red fish, blue fish, goes the Dr. Seuss children's story. Why isn't it two fishes? You may think, "Ok, it's hard to count fish so we group them all together. No problem."

Life on the farm

It's easy to understand that farmers would not worry about making plurals when they talk about sheep. After all, they are almost always in a group. When you have one sheep, you can also call it a ram or a ewe, and make those nouns plural by adding an -s: rams and ewes.

Let's look at some other things we can make plural. You've got a left foot and a right foot. Put them together and what have you got? Two feet. That doesn't follow the "add an -s" rule. 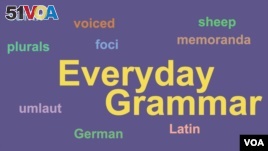 Same with mouse and its plural, mice. What happened to our neat rule for making words plural?

The answer is in our history. English came from German roots. German grammar changes the vowel sound in the middle of the word to show it is plural. The plural form of the German word for goose, Gans is Gänse. The vowel with two dots over it is called an umlaut. So goose becomes geese in English.

There are other plurals where the vowel changes like in the German pattern. Man - men and woman - women are examples of different vowel sounds in plural words. Sometimes a consonant changes, as with words that end in an f sound, such as leaf. The voiceless sound f takes on a voiced quality, or v, and an s sound is added to the word. We have autumn leaves and sharp knives.

Another way to make plurals in English is to add the suffix -en. We see this in the words brother - brethren; child - children and ox -oxen. These are words that come from Old English.

With words that come from foreign languages, there are some patterns that may help you remember the plural. Many technical words in English came from Latin. Let's look at the plural of some words from Latin. Words that end in -us drop that ending and add -i to become plural, as in fungus - fungi and cactus - cacti.

What is that orange thing on the tree?

It's a fungus. There are a lot of different fungi in this forest.

For words that end in -um, the ending changes to -a, as in the words datum - data and medium - media. These two words are more common in their plural forms than the singular forms in our digital life. Listen to how the words medium and media appear in this conversation.

I heard you got a job at the New York Times.

Yeah, I'm glad to be working in mass media.

But newspapers are a dying medium, aren't they?

Hey, I hope not. I'm writing a blog for them.

When a word from Latin ends in --ex or -ix, the plural ending is -ices. This results in index - indices and matrix - matrices. Here is another conversation

The financial news is bad. The Dow Jones index is down.

Don't worry, there are other indices, like employment, going up.

Are you ready to try making plurals with some English words?

Use the Germanic pattern for these words:

Use the Latin pattern for these words:

There are many more irregular plural forms in English. We'll look at those in another episode of Everyday Grammar. For now, we leave you with Frank Sinatra, singing Autumn Leaves,

But I miss you most of all my darling

When autumn leaves start to fall

umlaut - n. a mark ¨ placed over a vowel (such as a u in German) to indicate a specific pronunciation

voiceless - adj. technical, of a sound made without moving your vocal cords

voiced - adj. technical, of a sound made by moving your vocal cords

suffix - n. a letter or a group of letters that is added to the end of a word to change its meaning or to form a different word

Now it's your turn. Write a sentence with an unusual plural and we'll give you feedback in the comments section.

American linguist John McWhorter produced video on the history of English plurals on TED for Education.