US Abortion Case Raises Questions about Other Countries

Update Required To play the media you will need to either update your browser to a recent version or update your Flash plugin.
By Dan Novak
04 May 2022


An abortion case now being considered by the U.S. Supreme Court raises questions about how it could influence other countries.

On Monday an early version, or draft, of a Supreme Court opinion was released without permission. The opinion suggested that the high court could overturn the legal case from 1973 that legalized abortion across the country.

It is not clear what the effects of the decision could be outside the U.S. But courts in many parts of the world have been legalizing abortion. 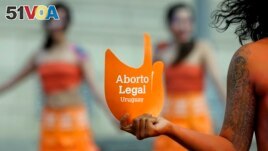 For example, in February, Colombia's Constitutional Court legalized the operation until the 24th week of pregnancy.

Women's activists around the world say they are very concerned with the U.S. Supreme Court's draft ruling. They say it shows how their gains can be taken back.

"It is an awful precedent for the coming years for the region and the world," said Colombian Catalina Martínez Coral. She is with the Center for Reproductive Rights based in New York City. Her group was among the parties that brought the abortion case to Colombia's high court.

The ruling in February permitted women to have abortions within the 24-week period. Before the case, Colombian women could only legally get an abortion in certain cases. These included if a fetus presented malformations or if a pregnancy resulted from rape. Abortion is still permitted after that period in special cases.

The decision fell short of advocates' hopes for a complete decriminalization. But Martínez Coral said it still left Colombia with the "most progressive legal framework in Latin America."

Last year, Mexico's high court ruled that it was unconstitutional to punish abortion. The ruling bars charging a woman with a crime for ending a pregnancy.

In Argentina, lawmakers in late 2020 passed a bill legalizing abortion until the 14th week. Abortions are legal after that for certain cases. Abortion is also widely available in Cuba and Uruguay.

But expansion of abortion has not extended to all of Latin America. In Brazil, abortion is only permissible in cases of rape, risk to the woman's life and proven cases of a kind of birth defect.

Honduras, Nicaragua and El Salvador have total bans with no exceptions.

Many African nations also maintain complete bans. But in October 2021, Benin legalized abortion in most cases for up to 12 weeks. Before it was legalized, 200 women were dying each year of complications from secret abortions.

Laws are different across the Muslim world.

Abortion has been legal up to 12 weeks in Tunisia for many years. But in Iran it has been banned since the 1979 Islamic Revolution. Last year, one of Islam's top religious leaders in Cairo said abortion is not the answer even in cases where a child is likely to be seriously ill or disabled.

Agnes Callamard is the secretary-general of the human rights group Amnesty International. She said in a statement: "there are grim signs that the United States is out of step with the progress that the rest of the world is making in protecting sexual and reproductive rights."

The U.S. Supreme Court's final decision is expected to come in late June or July.

precedent — n. something done or said that can be used as an example or rule to be followed in the future

malformation — n. a condition in which part of the body does not have the normal or expected shape

advocate — n. a person who works for a cause or group