US Agencies: 2021 Was World’s 6th Warmest Year on Record

Update Required To play the media you will need to either update your browser to a recent version or update your Flash plugin.
By Bryan Lynn
17 January 2022


Two American agencies have released data showing that 2021 was the world's sixth warmest year on record.

The data was collected by the U.S. space agency NASA and the National Oceanic and Atmospheric Administration (NOAA).

The recently released measurements also showed that the last eight years were the eight hottest on record. And the last 10 years were the warmest since record-keeping began in 1880. 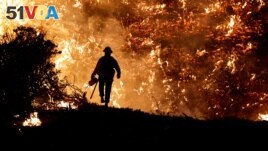 Russell Vose is a chief researcher at NOAA's National Centers for Environmental Information. He told reporters the data shows that it is warmer now than at any time during "at least the past 2,000 years, and probably much longer."

The measurements showed that world temperatures – averaged over a 10-year period – are nearly 2 degrees hotter than 140 years ago.

Scientists say the effects of La Nina kept world temperatures lower. La Nina is a weather pattern that happens in the Pacific Ocean but affects weather around the world. A La Nina event happens when ocean surface waters cool along the Pacific coast of the South American tropics. This takes place about every two to seven years.

He added that the hotter temperatures are linked to human causes. "It's because of us," Schmidt said. "And it's not going to go away until we stop increasing the amount of carbon dioxide in the atmosphere."

Another recent study found that the deep ocean – where most heat is stored in the seas – also set a record for warmth in 2021.

The measurements by NASA and NOAA showed that the last time Earth had a cooler than normal year was in 1976. That means that 69 percent of the people on the planet – more than 5 billion people under age 45 – have never experienced such a year, United Nations data shows.

pattern – n. something that happens in a regular or repeated way

tropics – n. (pl.) parts of the world that are near the equator and, therefore, are usually warm

trend – n. a general development or change in a situation