Update Required To play the media you will need to either update your browser to a recent version or update your Flash plugin.
By Hai Do
23 March 2021


A United States health agency said Tuesday that drug-maker AstraZeneca might have included "outdated information" on its latest U.S. vaccine test. The action again raised questions about the approval of the company's COVID-19 vaccine in the United States.

The unusual statement was released by the National Institute of Allergy and Infectious Diseases (NIAID) early on Tuesday. The health agency said independent experts "expressed concern that AstraZeneca might have included outdated information from that trial, which may have provided an incomplete view of the efficacy data."

Following the U.S. health agency's statement, AstraZeneca said Tuesday that those numbers included information from its U.S. drug trial up to February 17. The company said it will provide an update within 48 hours to the Data and Safety Monitoring Board (DSMB).

The safety board is a committee of independent scientists organized by the NIAID to study drug trials and their safety in the U.S. The NIAID is headed by Dr. Anthony Fauci who was recently named "chief medical advisor" by U.S. President Joe Biden.

Fauci told Statnews, "We felt we could not remain silent." He added: "In my mind, it's an unforced error by the company."

Dr. Paul Hunter is a professor of medicine at the University of East Anglia. He told the Associated Press, "I doubt it was (U.S. officials') intention to deliberately undermine trust in the AstraZeneca vaccine." Hunter added, "But this will likely cause more vaccine hesitancy." 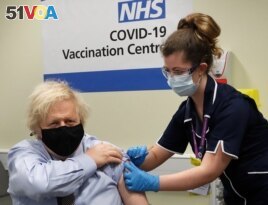 Trouble from the start

Early in the pandemic, the AstraZeneca vaccine, developed with Britain's University of Oxford, was considered a leading candidate against the coronavirus. It costs much less than other vaccines. It also does not require extreme cold storage, making it easier to use in countries with limited resources.

Volunteers in the early study from Britain, Brazil and South Africa produced antibodies to protect against the virus with no serious side effects. The company then expanded the drug trials to the United States. It also signed agreements to provide the vaccine at cost to nations around the world, including the United Nations COVAX program, to help poor countries.

Last year, the company temporarily suspended the trials in September after a volunteer in Britain developed inflammation in her spine. It was later found to be unrelated to the vaccine but led to a long delay in the United States.

In November, AstraZeneca and the University of Oxford reported unclear results from two different vaccine treatments in the British drug trial. Some volunteers received a half dose and some received a full dose. AstraZeneca later reported that it was a result of manufacturing problems.

The action left many to question whether the shot was safe and effective. John Moore is a professor at Weill Cornell Medical College in New York. He told Reuters at the time, "When you get corporate and academic scientists saying different things, it doesn't give you the impression of confidence in what they're doing."

Last week, more than 12 countries, mostly in Europe, stopped using the vaccine after reports it was linked to blood system blockages, known as blood clots. On Thursday, the European Medicines Agency said its investigation found the vaccine did not raise the risk of blood clots, other than very rare cases.

AstraZeneca said Monday it would provide information to the U.S. Food and Drug Administration (FDA) in the coming weeks to apply for emergency use permission.

Jimmy Whitworth is a professor of international public health at the London School of Hygiene and Tropical Medicine. He told the Associated Press, "If the U.S. regulator looks at this data and authorizes AstraZeneca, that will carry a lot of weight."

efficacy –n. the power to produce the desired result or effect

intention –n. the thing that you plan to do; the goal or aim of some action

deliberately –adv. done in a way that is meant or planned

hesitancy –n. slow to act or speak especially because of being unsure

inflammation –n. a condition when part of the body becomes red, bigger and more sensitive

dose –n. the amount of a medicine or vaccine that is taken at one time

impression –n. the effect or influence that something or someone has on a person's thoughts or feelings

confidence –n. a feeling of being sure that something is true or will happen in an expected way

authorize –v. to give legal or official approval