Update Required To play the media you will need to either update your browser to a recent version or update your Flash plugin.
By Gregory Stachel
14 July 2022


The U.S. government has agreed to a request from environmental groups to study increasingly important habitats for North Pacific right whales.

The animals are among the rarest whales in the world. The National Oceanic and Atmospheric Administration (NOAA) Fisheries estimates there are about 30 North Pacific right whales left in the world. Centuries of hunting, ship strikes, and entrapment in fishing equipment have badly harmed the species. They have been listed as endangered since 1973. 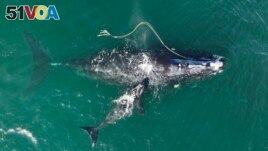 This photograph shows an endangered North Atlantic right whale stuck in fishing gear being sighted with a newborn calf on Dec. 2, 2021 in waters near Cumberland Island, Georgia, USA. (Georgia Department of Natural Resources/NOAA Permit #20556 via AP)

Two groups -- the Center for Biological Diversity and Save the North Pacific Right Whale – are asking the agency to increase the protected areas by connecting them.

NOAA said in a statement that this would increase the Bering Sea boundary west and south. The proposal would also extend the critical habitat area off Alaska's Kodiak Island east to the Gulf of Alaska to include new feeding grounds. The Center for Biological Diversity said these feeding grounds for the whales were confirmed by new research.

Kristin Carden is a scientist at the Center for Biological Diversity. She said in a statement, "Safeguarding the North Pacific right whale's habitat is crucial to protecting these magnificent animals."

NOAA Fisheries said the extended habitat would include productive fishing areas and paths that many ships take. But it also would include places where the large whales have been seen and heard.

The environmental groups said in their request to NOAA that physical and biological features in the proposed critical habitat require special considerations and protections. They may include placing speed limits on ships.

Keven Campion is with the Save the North Pacific Right Whale group. He said the proposal is, "is a step in the right direction for making sure these animals get to exist on the planet."

NOAA Fisheries is taking comments on the proposal until September. The agency must publish its decision within a year.

whale – n. an often very large animal that lives in the ocean and that is a mammal rather than a fish

feature – n. an interesting or important part, quality, or ability