US Aircraft Carrier to Visit Vietnam

Update Required To play the media you will need to either update your browser to a recent version or update your Flash plugin.
By Hai Do
25 January, 2018

Mattis met in Hanoi with Vietnamese Communist Party General Secretary Nguyen Phu Trong. He said, "Thank you for the increasing partnership with our aircraft carrier coming in to Da Nang here in March."

Da Nang was the landing site for the first American troops to arrive in Vietnam in 1965. The city recently hosted a gathering of world leaders at the Asia-Pacific Economic Cooperation.

It would be the first such visit from an aircraft carrier since the Vietnam War ended. Smaller Navy vessels have visited Vietnam, as relations between the two countries have improved.

The planned visit to Da Nang comes as tensions have again increased in the South China Sea. Last week, China accused a U.S. warship of violating its sovereignty by sailing off the disputed Scarborough Shoal. The U.S. said it was a usual "freedom of navigation" operation. 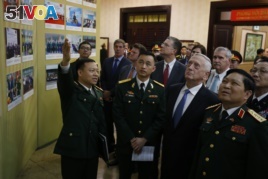 During his meeting with Vietnamese Defense Minister Ngo Xuan Lich, Mattis said, "We recognize that relationships never stay the same. They either get stronger or they get weaker, and America wants a stronger relationship with a stronger Vietnam."

His visit also included a meeting with the Vietnamese president.

Earlier Thursday, Mattis visited Tran Quoc, one of Vietnam's oldest Buddhist temples. The temple stands on a small island at the edge of a lake in Hanoi. That is where American politician John McCain was shot down in 1967.

Next week will mark the 50th anniversary of the Tet Offensive. On January 30, 1968, Communist North Vietnam launched attacks throughout targets in the South. The offensive turned American public opinion against the war and led to its withdrawal seven years later.

host - v. to be the host for an event

sovereignty - n. a country's independent authority and the right to govern itself