US and Allies Consider Ways to Help Iraqi Refugees

Update Required To play the media you will need to either update your browser to a recent version or update your Flash plugin.
By Hai Do
13 August, 2014


The U.S. and its allies are discussing ways to rescue thousands of Iraqi civilians trapped on a mountaintop in northern Iraq. They are mostly members of religious minorities. They are fleeing attacks by Islamic State militants.

Ben Rhodes is a national security adviser for President Barack Obama. He said the president would decide within days whether to send American military troops to help. He said the administration does not believe American troops will return to a combat role in Iraq.

Earlier Tuesday, the U.S. deployed more than a hundred military advisers to northern Iraq to help find ways to help the trapped civilians. They include members of the Yazidi and Christian minority groups.

France said it is sending weapons to Kurdish forces in Iraq to help them fight Islamic State militants who have taken control of the area. The French government said the weapons would be sent within hours. 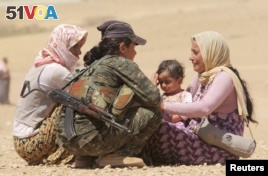 Displaced people from the minority Yazidi sect, fleeing violence from forces loyal to the Islamic State in Sinjar town, get help from a member of the Kurdish People's Protection Units.
British Prime Minister David Cameron said an international plan is being developed to rescue the refugees.

But on Wednesday, Ukraine's Interior Minister Arsen Avakov called the transport a provocation. He said the trucks would not be permitted to enter Ukraine.

A spokesman for Ukrainian President Petro Poroshenko warned that the country faced the possibility of, in his words, a "direct invasion of the Ukrainian territory under the pretense of humanitarian cargo delivery."

At least two rockets fired from the Gaza Strip landed inside southern Israel late Wednesday. The attack came moments before Palestinian negotiators said they had agreed to extend a cease-fire with Israel for five days. Hamas militants denied firing the rockets. Israel says no damage resulted.

This report was written by Hai Do from VOANews reports. It was edited by Caty Weaver and narrated by Christopher Cruise.