Update Required To play the media you will need to either update your browser to a recent version or update your Flash plugin.
By Dan Friedell
22 December, 2016

Have you heard this song?

It is the theme song for a television show in Japan.

The song is called "Koi." And the singer is Gen Hoshino. He is one of the actors on the show.

According to reports from Japan, the actors in the show dance to the song at the end of each program. The dance includes moves like tapping your shoulders and wiggling your fingers above your head. 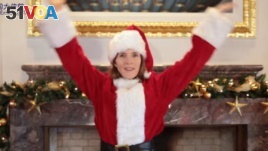 U.S. Ambassador to Japan Caroline Kennedy dressed up as Santa Clause for the embassy's version of the popular "koi" dance.

It is catching on in Japan. Its popularity is similar to the recent mannequin video challenge that spread across the United States.

Some people in Japan are posting videos of themselves doing this dance.

Japanese figure skater Yuzuru Hanyu made one of these videos. He won the men's gold medal at the 2014 Sochi Olympics.

Another person who made a dancing video is Caroline Kennedy, the U.S. Ambassador to Japan.

She and members of her staff made a video of themselves doing the viral dance.

The U.S. embassy in Tokyo posted it on Tuesday. It has already been played more than 3 million times.

In the video, she is dressed in a Santa Claus suit. Some members of her staff are wearing Uncle Sam-style hats. Others are dressed in holiday clothing.

The Japan Times wrote a story about the 90-second video.

The newspaper said the embassy staff originally planned for the video to be private. But the production turned out so well they chose to post it for the world to see.

A spokeswoman for the embassy said the employees practiced the moves, but not for a very long time. "We do have other work to do," she said.

Have you made a video of yourself doing the dance? Let us know in the comments section.

theme – n. the main melody that is repeated in a piece of music

tap – v. to hit (your fingers, feet, etc.) against something lightly

wiggle – v. to move up and down or from side to side with short quick motions

catch on – v. to become popular