US and Chinese Presidents Hold Private Talks During APEC Meeting

Update Required To play the media you will need to either update your browser to a recent version or update your Flash plugin.
By VOA
11 November, 2014


U.S. President Barack Obama says he wants to take the U.S. relationship with China "to a new level."

Mr. Obama met with Chinese President Xi Jinping in Beijing Tuesday. Mr. Obama said, "When the United States and China are able to work together effectively, the whole world benefits."

The two leaders will also hold private talks tomorrow. Their meetings are taking place alongside the Asia-Pacific Economic Summit which China is hosting.

Delegates to the summit gave partial approval to a China-led free trade zone. China has been pushing for the establishment of a Free Trade Area of the Asia-Pacific, or FTAAP. The U.S. has proposed a similar free trade area that does not include China.

President Obama and Russian President Vladimir Putin have also met briefly in Beijing. They discussed a few world issues on which their governments do not agree. 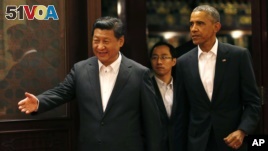 A U.S. National Security official said the issues included Iran, Syria and Ukraine. She but did not provide additional details. Mr. Putin's spokesman made similar comments.

NATO "Concerned" by Flow of Weapons Into East Ukraine

NATO's military commander expressed concern Tuesday about an increasing flow of weapons to pro-Russia separatists in eastern Ukraine. U.S. Air Force General Philip Breedlove spoke to reporters at a NATO air base near Naples, Italy. He said he was concerned about the "increased movement" of military equipment into eastern Ukraine.

The NATO commander said at least 250 to 300 Russian troops remain inside eastern Ukraine helping the separatists. He also said Russia is moving forces capable of nuclear weapons use into Crimea. Russia annexed the Ukrainian territory in March.

Russia has repeatedly denied any official military involvement in Ukraine.

A South Korean court has found the captain of a passenger boat guilty of negligence in a deadly sinking in April. The court sentenced Lee Jun-Seok to 36 years in prison.

The Sewol sank in April while carrying hundreds of people, mostly schoolchildren. Video recovered later showed members of the Sewol crew leaving the sinking boat while many schoolchildren were still on board. 295 bodies have been recovered in the seven months since the sinking.

Judges cleared the captain of a homicide charge that could have resulted in the death penalty. The ferry's chief engineer was found guilty of homicide for not helping two injured crew members. He received a sentence of 30 years in prison. Another 13 crew members received sentences from five to 20 years.

partial – adj. not complete or total

annex – v. to add (an area or region) to a country, state, etc. : to take control of (a territory or place)

negligence – n. failure to take the care that a responsible person usually takes; lack of normal care or attention

on board – idiom carried, or happening, on a vehicle

homicide – n. the act of killing another person