Update Required To play the media you will need to either update your browser to a recent version or update your Flash plugin.
By Anne Ball
09 January, 2017


North Korea says it could test-launch an intercontinental ballistic missile (ICBM) at any time and from anywhere it wants to.

The North Korean state news agency KCNA made the announcement on Sunday.

American Secretary of Defense Ash Carter reacted by stating that an ICBM launch would be a "serious threat" to the United States. He said the U.S. military would shoot down the missile if it crossed into the territory of the U.S. or its allies.

"If it were threatening to us, yes. That is, if it's predicted impact or one of our friends or allies, yes, we would shoot it down." 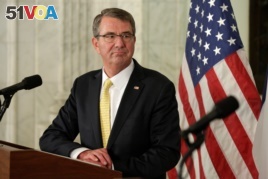 He said the U.S. military has strengthened its missile defenses and deployed them in South Korea, Japan and Guam.

North Korea did not say for sure that it will carry out an ICBM test in the near future. But the statements could suggest the two sides are getting ready for a new relationship when Donald Trump becomes U.S. president. He will take office on January 20.

In a New Year's message, North Korean leader Kim Jong Un said that his country had reached the "final stages" of ICBM development. Two days later, Trump tweeted that the possibility of North Korea developing a nuclear weapon that can reach the U.S. "won't happen!"

A North Korean Ministry spokesman said on Sunday that his government has the right to test missiles whenever it sees fit.

"The ICBM will be launched anytime and anywhere determined by the supreme headquarters of the DPRK,'' the spokesman told the KCNA news agency. DPRK is short for North Korea's official name, the Democratic People's Republic of Korea.

Troy Stangarone is with the Korean Economic Institute in Washington, D.C. He told VOA there are good reasons for the North to delay testing of its missile. They include the start of the Trump presidency, and the political situation in South Korea.

"With everything going on in the region right now, with the transition to President Trump, with the political situation in South Korea, delaying might actually make more sense for them, in the sense that Trump is a wild card and you do not know how he might respond, and if they were to take and engage in a test now, they could end up actually unifying the populace on the conservative side rather than potentially allowing a liberal president to take power in South Korea if Park Geun-hye is impeached."

On Monday, South Korean officials said they believe the North's threat of a missile test is meant to influence relations with the new U.S. administration.

Jeong Joo-hee is a spokesman with South Korea's Unification Ministry. He suggested that North Korea made the threat in hopes of forcing the Trump administration to deal with the North on its own terms. He said the goal was to "shift responsibility (to the U.S.) when North Korean fires (a missile) in the future."

The South Korean Defense Ministry called North Korea's talk of an ICBM test "regrettable." It said there would be consequences, or results, like international sanctions.

Sanctions or other measures have yet to stop North Korea's nuclear activities and missile development program. The North has carried out two nuclear tests and launched 24 missile launches in the past year.

Commenting on the North's nuclear program last week, U.S. Deputy Secretary of State Antony Blinken said "with every passing day, the threat does get more acute."

North Korea is believed to have the ability to hit South Korea or Japan with a nuclear weapon. But there are still questions about whether the North's missiles can reach the U.S. mainland.

North Korea says it has successfully made a nuclear device small enough to sit on the head of a long-range missile. But it has not demonstrated that ability. Also, it has yet to test the missile's re-entry ability.

An ICBM test would be the next step in the development process.

Neither China nor Japan offered any strong official reaction on Monday to the ICBM statements coming out of North Korea and the United States.

But China has been unwilling to put strong economic pressure on its ally. China fears that would lead to increased instability on its border and a stronger U.S. presence on the Korean Peninsula.

Anne Ball wrote this story for Learning English with materials from VOA and the Associated Press. George Grow was the editor.

intercontinental ballistic missile (ICBM) – n. a type of missile that can fly form one continent to another

a wild card – n. a person or thing that could affect a situation in a way that cannot be predicted : an unknown or unpredictable factor

sanction – n. an action taken, or an order given to force a country to obey international laws by limiting or stopping trade with that country, by not allowing economic aid for that country, etc. instability – n. the quality or state of being unstable

escalate – v. to become worse or to make (something) worse or more severe