Update Required To play the media you will need to either update your browser to a recent version or update your Flash plugin.
By Hai Do
04 January, 2018

The move came just days after California, the country's largest state, began permitting recreational use of the drug. 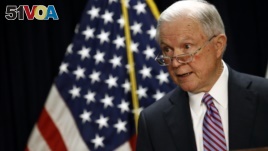 In a memo, Sessions asked federal lawyers to consider the seriousness of the crime and its impact "in deciding which marijuana activities to prosecute under these laws."

The move by Sessions is likely to create questions in states where it is legal to buy, use and grow marijuana.

Although some state laws have legalized the use of the drug for medical and recreational reasons, marijuana remains illegal under U.S. federal law.

Republican lawmaker Cory Gardner of Colorado quickly voiced opposition to Sessions' plan. Colorado is among eight states that have legalized marijuana for recreational use.

Gardner said in a Twitter message that the Justice Department "has trampled on the will of the voters" in Colorado and other states. He also said the action goes against what Sessions had said he would do before becoming attorney general.

The legal sale of marijuana has become a multi-million-dollar business. It helps fund schools, educational programs and law enforcement. In California, the business is estimated to bring in $1 billion a year in tax money within the next several years.

Maria McFarland Sanchez-Moreno is with the Drug Policy Alliance. She called Sessions' policy a return to outdated drug-war policies that mainly affected minorities. She added that Sessions "wants to maintain a system that has led to tremendous injustice ... and that has wasted federal resources on a huge scale."

A public opinion study carried out by Gallup in October 2017 shows that 64 percent of Americans support legalizing marijuana.

The attorney general and some law enforcement officials have blamed legalization for increased drug trafficking. They said drug traffickers have taken advantage of state laws to grow marijuana. Then, they sell it across state lines for more money.

Sessions has blamed the illegal use of marijuana and heroin for rising violence in America.

But activists argue that legalizing the drug would likely reduce violence, since criminals would no longer control the marijuana trade.

The Associated Press reported this story. Hai Do adapted it for VOA Learning English. Ashley Thompson was the editor.

recreational - adj. (of a drug) used for pleasure instead of for medical purposes

hands-off - adj. allowing people to do what they want to do without bothering or stopping them

memo - n. a usually brief written message from one person or department in an organization, company, etc., to another

prosecute - v. to hold a trial against a person who is accused of a crime to see if that person is guilty

trample - v. to treat other people's rights, wishes, or feelings as if they are worthless or not important

outdated - adj. no longer useful or acceptable : not modern or current

take advantage of - to use (something, such as an opportunity) in a way that helps you : to make good use of (something)