US Audiences Say 'Hello' to Adele

Update Required To play the media you will need to either update your browser to a recent version or update your Flash plugin.
By Caty Weaver
01 July, 2016


British singer Adele opens a series of shows in the United States this week in the small city of Saint Paul, Minnesota.

Three hundred thousand people live in Saint Paul. But it is part of a larger metropolitan area that is home to more than 3 million people. It is on the east side of the Mississippi River, across from Minneapolis. The two are often called the "Twin Cities."

The city of Saint Paul has recognized the importance of Adele's visit. It took this chance to make fun of the competitiveness between the two cities.

The singers in the video urge people to visit the "east side" of the river. They describe all the fun things that people can do there. 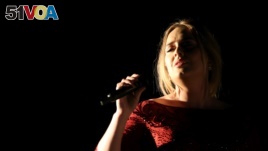 Hard to know what might draw those on the "west side" over the river more: a funny video or the real "Hello" singer herself.

The tickets for the concert and the rest of Adele's tour, however, sold out last December.

Adele will play again in Saint Paul July 6. Then she leaves Minnesota for three performances in the big city of Chicago, Illinois.

Adele's most recent album "25" was released in November of last year. It spent 10 weeks at the top of Billboard magazine's list of best-selling albums.

Now, Billboard reports the album is climbing the charts again after its June 24 release on streaming services. Industry experts expect the album to sell as many as 37,000 digital copies by June 30. That would put it back in the top 10.

Several of the album's songs, including "When We Were Young," were released as singles on streaming services earlier this year.

Adele is an expert "breakup" songwriter. She told the New York Times newspaper that she knows she has written a good song when it makes her cry.

But other people's songs make her cry, too. In a People magazine interview, Adele told about the songs of heartbreak that move her.

Adele will perform in more than 15 U.S. cities during her tour in the country. She spends the most time in Los Angeles and New York. Her last appearance will be in Houston, Texas in November.

Caty Weaver wrote this story for Learning English. Hai Do was the editor.

Have you seen Adele in concert? Do you have a favorite song by the music star?

metropolitan - adj. of or relating to a large city and the surrounding cities and towns

twin - adj. forming one of a pair of related or connected ideas or places

chart - n. a list that shows which music recordings have sold the most during a recent period of time

break-up - n. the end of a relationship, marriage, etc.