Update Required To play the media you will need to either update your browser to a recent version or update your Flash plugin.
By Hai Do
07 July 2022


American basketball star Brittney Griner admitted guilt to drug possession in a Russian court on Thursday. She also said she did not mean to break the law.

"I'd like to plead guilty, your honor. But there was no intent. I didn't want to break the law," Griner said in English. Her plea was then repeated in Russian for the court in Moscow.

One of Greiner's lawyers added, "Brittney stressed that she committed the crime out of carelessness, getting ready to board a plane to Russia in a hurry, not intending to break Russian law." 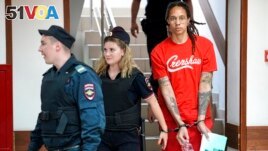 Griner was detained in February at the airport in Moscow after smoking devices with cannabis oil were reportedly found in her belongings. She could face up to 10 years in Russian prison if she is convicted of transporting illegal drugs.

Griner's next court hearing is set to take place on July 14.

Griner's lawyer told reporters they were hoping for the lightest sentencing possible. The Russian foreign ministry said Griner could appeal her sentence once a verdict has been given.

Griner is a two-time Olympic gold medalist and a member of the Phoenix Mercury - one of the teams of the Women's National Basketball Association, or WNBA. In the off-season, Griner competes for the Russian team UMMC Ekaterinburg.

The trial began last week in Moscow. Her arrest five months ago came one week before Russia launched its war in Ukraine.

The U.S. and Western allies have helped Ukraine with weapons and supplies in the fight against the Russian invasion.

Elizabeth Rood is deputy chief of mission at the U.S. Embassy in Moscow. She told reporters after the hearing that she spoke to Griner in the courtroom and shared a letter with her from President Joe Biden. Griner, she said, is eating well and is able to pass time reading books.

Rood said, "I would like again to emphasize the commitment of the U.S. government at the very highest level to bring home safely Ms. Griner and all U.S. citizens wrongfully detained."

The U.S. State Department has also put Griner's case under the supervision of the government's chief hostage negotiator.

Russian Deputy Foreign Minister Sergei Ryabkov objected to the U.S. description of Griner as "wrongfully detained." He warned that U.S. criticism and comments about the Russian judicial system, "make it difficult to engage in detailed discussion of any possible exchanges."

When asked about the possibility of Griner being exchanged for a Russian citizen jailed in the U.S., Ryabkov said that until her trial is over "there are no... reasons to talk about any further steps."

Russian news media have suggested that Griner could be exchanged for Russian arms trader Viktor Bout. Called "the Merchant of Death," Bout is serving a 25-year sentence in the U.S. He was convicted of plotting to kill U.S. citizens and providing aid to a terrorist organization.

Russia has campaigned for Bout's release for years. But the severity of Bout's crime as compared to Griner's reported offense makes the one-to-one exchange unlikely.

Others have suggested that Griner could be traded along with Paul Whelan. The former U.S. Marine and security director is serving a 16-year sentence in Russia after being convicted of spying. The United States, however, has repeatedly said he was trapped.

Hai Do adapted this story for Learning English based on reports from The Associated Press and Reuters.

plead - v. to say in court that you are guilty or not guilty

stress - v. to give special attention to

commit - v. to do something that is harmful or illegal

convict - v. to prove that someone is guilty in court

verdict - n. a decision made by a jury in a trial

emphasize - v. to give special attention to

engage in - phrasal verb, to cause someone to take part in something