US, Allies in Show of Force against N. Korea

Update Required To play the media you will need to either update your browser to a recent version or update your Flash plugin.
By Jonathan Evans
31 August, 2017


The United States and its allies have again responded to a North Korean missile test. This time, the response included a military exercise using real ammunition.

General Terrence J. O'Shaughnessy is the commander of U.S. Pacific Air Forces. He said, "North Korea's actions are a threat to our allies, partners and homeland, and their destabilizing actions will be met accordingly. Our forward deployed force will be the first to the fight, ready to deliver a lethal response at a moment's notice if our nation calls." 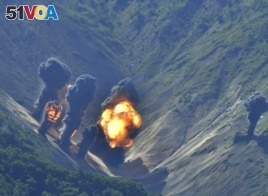 The U.S. military frequently responds to North Korean actions with a show-of-force display of its attack aircraft. In July, the U.S. and South Korean militaries also fired missiles into South Korean waters. The action was in response to a North Korean intercontinental ballistic missile launch.

Joseph Dunford is the top general of the U.S. military. On a recent trip to the region, he said the military's main goal is supporting U.S. efforts to denuclearize the Korean peninsula. But he added that the U.S. is preparing what he called "viable military options" in the event that those efforts fail.

Carla Babb reported this story for VOA News. Jonathan Evans adapted it for Learning English. Hai Do was the editor.

destabilize – v. to cause something to be unable to continue existing or working in the usual or desired way; to make something unstable

stealth – adj. used to describe military aircraft that are designed so that they cannot be easily seen by radar

viable – adj. capable of being done or used; workable