Update Required To play the media you will need to either update your browser to a recent version or update your Flash plugin.
By Mario Ritter
30 September, 2016


The United States announced criminal charges and economic sanctions against four Chinese individuals and a Chinese company earlier this week.

The U.S. government said it acted to punish them for suspected support for North Korea's nuclear weapons program.

On Wednesday, a State Department official suggested that more Chinese companies and individuals could face investigation for suspected violations of sanctions on North Korea. 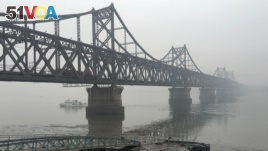 He said, "It would also be useful if Chinese banks and companies understood that increasingly dealing with North Korean companies, especially those that are sanctioned, is going to be risky."

The four include the company's chairwoman, Ma Xiaohong. They are accused of plotting to avoid sanctions against North Korea, and using American financial businesses to hide the money they earned illegally.

Chinese officials also are investigating the company. They are looking at its connection with the Kwangson Banking Corporation, a North Korean bank. U.S. and United Nations have said the bank has provided financial services in support of North Korea's weapons programs.

A State Department officials said, "This shows we can work cooperatively with China; we both see it in our interests to apply greater pressure on North Korea."

On Tuesday, a Chinese Ministry of Foreign Affairs official spoke to reporters about the U.S. action. Spokesman Geng Shuang said China was prepared to support U.N. resolutions against North Korea. The resolutions call for sanctions to punish the North for its nuclear and missile tests.

However, the spokesman expressed opposition to other countries using their own laws against companies or people within China.

"I want to stress that we oppose any country enacting so-called ‘long-arm jurisdiction,' using its own domestic laws against a Chinese entity or individual," he said.

In March, China agreed to the strongest U.N. Security Council sanctions yet to limit trade with North Korea.

The council's members have approved other actions to punish the country for its nuclear activities and missile program. Those restrictions have largely halted North Korean trade with countries other than China.

North Korea has faced severe international sanctions to punish the country for its nuclear activity and missile program.

Those restrictions have largely halted North Korean trade with countries other than China.

This story was written from reports by Pete Cobus and Nike Ching for VOA News. Mario Ritter adapted it for VOA Learning English. George Grow was the editor.

entity –n. a legal business or organization, something that exists by itself and is separate from other things

middlemen –n. people who buy goods from a producer and sell them to someone e