US Building Air Base for Drones in Niger

Update Required To play the media you will need to either update your browser to a recent version or update your Flash plugin.
By Phil Dierking
01 September, 2018


The U.S. Air Force is getting close to completing a base in northern Niger for armed drones that will target militant groups operating in the area.

Auburn Davis, a spokesman for U.S. Air Force Europe and Air Force Africa, told VOA that the base is the biggest U.S. Airforce-led construction project ever. The total proposed cost of building the base is $98.5 million.

The base is in the northern city of Agadez in the Sahara Desert. There, militants and smugglers find ways to go to and from Libya, Algeria, Mali and Chad. 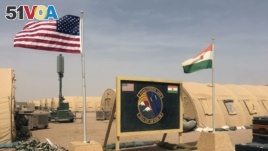 In this photo taken April 16, 2018, a U.S. and Niger flag are raised side by side at the base camp for air forces and other personnel supporting the construction of Niger Air Base 201 in Agadez, Niger.

About 650 military members will be deployed to the base once it is operational.

The U.S. military said an undecided number of military drones, including MQ-9s, will also be sent to the base. They are currently being used at another drone base in the capital, Niamey.

The U.S military says it decided to build the base in Agadez in partnership with the government of Niger.

Nigerien Defense Minister Kalla Mountari confirmed that his government requested the Air Force's presence to help the country in its fight against terrorists and international criminal groups.

Militarization of the Sahel

Some experts believe the construction of the base is a sign that the Sahel area of Africa is becoming increasingly militarized.

William Assanvo is a West African coordinator at the Institute for Security Studies Africa. He told VOA that the future base, "raises some concerns about foreign powers taking roots in the Sahel to pursue national interests that are not always clear..."

Nigerien officials consider the Agadez base important for dealing with the growing security threat of terrorism in Niger and nearby countries.

Niger's defense minister, Kalla Mountari, said the area between Agadez and his country's border with Libya is large and unpopulated. Militants are able, in his words, "to move about freely there." He added that militants also use the area to move weapons.

Assanvo said he believes the move to Agadez could also be part of the U.S. military's effort to have a quiet presence in the area -- without leading to opposition from the local population.

"This is important," Assanvo said, "given the clear opposition a significant part of [the Nigerien population has] voiced about the increasing Western presence in the country."

This story was originally written by Ibrahim Ahmed for VOANews. Phil Dierking adapted the story for Learning English. Ashley Thompson was the editor.

smuggler - n. to move (someone or something) from one country into another illegally and secretly