Update Required To play the media you will need to either update your browser to a recent version or update your Flash plugin.
By Mario Ritter Jr.
09 January, 2019


The administration of U.S. President Donald Trump has launched a campaign to better protect trade secrets from foreign hackers.

The Washington-based National Counterintelligence and Security Center (NCSC) works with the U.S. government on intelligence issues. It helped launch the campaign. The NCSC is concerned about cyberattacks on U.S. government agencies and private companies carried out by China, Russia, North Korea and Iran.

William Evanina is director of the NCSC. He said business leaders should know about the "intent of our adversaries and what they are trying to do economically to gain the upper hand." 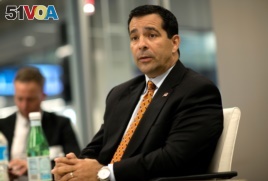 Director of the National Counterintelligence and Security Center William Evanina speaks during the Reuters Cybersecurity Summit in Washington, U.S., October 31, 2017.

One of the printed materials describes methods that hackers use to break into computer networks. It details how they create false social media accounts to trick people into giving out information about themselves and their work. It says that researching software and using anti-virus software can help protect personal information.

The first part of the campaign is called "Know the Risk, Raise Your Shield." It is aimed at federal workers.

The U.S. government has brought nine cases against individuals and companies since July 2018. In December, the government brought charges against two suspected hackers for stealing sensitive government and business information. The two people reportedly belonged to a group of hackers known as APT 10.

Russia and China have both repeatedly denied they have been carrying out such cyberattacks.

Evanina said the most serious threats, however, are malicious software put in computer parts. He also said companies must take greater care to investigate job candidates to ensure they are not acting for foreign powers.

hacker –n. a person who secretly gets access to a computer system to get information or cause damage

cyberattacks –n. an attempt to illegally enter a computer system with the purpose of causing damage or harm

intent –n. an aim or purpose

adversaries –n. an enemy or opponent

brochure –n. a small, printed booklet with information and pictures

persistent –adj. continuing to do or try to do something

malicious –adj. showing the desire to cause harm