Update Required To play the media you will need to either update your browser to a recent version or update your Flash plugin.
By Dan Friedell
02 June 2022


The U.S. Department of Education announced Wednesday that it will cancel the federal student loans of hundreds of thousands of people.

Those people borrowed money to attend Corinthian Colleges, a for-profit group of schools that was judged to have carried out fraud.

Secretary of Education Miguel Cardona announced the move to cancel or "discharge" the loans. His message was for students who went to schools run by Corinthian Colleges between 1995 and 2015 and who still owe money. 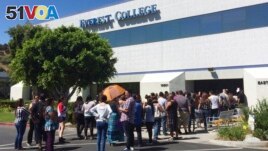 FILE - Students wait outside Everest College in Industry, Calif., hoping to get information on loan forgiveness, April 28, 2015. Everest was a part of Corinthian Colleges, which shut its U.S. campuses in April 2015, displacing 16,000 students.

"Every student deceived, defrauded and driven into debt ... can rest assured that the Biden-Harris administration has their back," he said.

There are hundreds of thousands of students who paid to go to the schools run by Corinthian, which failed financially in 2015. They decided to attend the schools based on false claims of success. The students borrowed money from financial aid programs run by the U.S. government.

Cardona said the company "exploited" students and "misled" them. He said they borrowed more and more money to pay for classes with the promise that they would find better jobs at the end of their studies.

There are a total of 560,000 students who are said to owe a total of $5.8 billion. Some of them already submitted documents asking the federal government to cancel their student debt, but the program was not well known. The Department of Education will discharge the student debt without any action by the borrower and will extend it to additional borrowers.

However, students who finished paying their loans will not receive anything.

The problems with Corinthian go back to the administration of former President Barack Obama. His administration worked with the California attorney general at the time, current Vice President Kamala Harris.

Government officials investigated the education business. They found that Corinthian Colleges was falsely telling students about graduates who had good jobs. Instead, those students were working at food stores and restaurants.

The government investigators found that the colleges run by Corinthian, with names like Everest, WyoTech and Heald, promised good results. They also pressured students to spend more money. The schools falsely said other colleges would accept educational credits from the Corinthian schools.

After several investigations, the Obama administration started a program for the students to get their loans canceled.

When he was running for president, President Joe Biden said he supported canceling up to $10,000 for people who stilled owed money for student loans. The administration has said it is considering ways Biden can do that through a presidential action instead of through Congress.

Including his announcement, Cardona said his department had so far approved $25 billion in loan discharges for a total of 1.3 million borrowers.

Eileen Connor is director of the Project on Predatory Student Lending. She called the action a big "student victory."

She praised the student borrowers saying, "They never stopped fighting."

Libby DeBlasio Webster is a lawyer for another organization called Student Defense. She called it a "fresh start" for the Corinthian college students. However, she noted that students from other for-profit colleges still need help.

Nathan Hornes is a former student at a school run by Corinthian. He called the Everest Institute he attended in Los Angeles "a joke of a school."

Hornes said he once played a game in class in place of taking an examination. His debt was canceled in 2017 through one of the earlier programs. But he said his sister is one of the students who will be helped by the new action by the Department of Education.

In a statement, he called the news "a relief."

A group that represents for-profit colleges said students who paid to go to schools that made false claims deserve their money back. But it notes that not all are like Corinthian Colleges.

Jason Altmire is head of a trade group called Career Education Colleges and Universities. He said the Department of Education should not punish schools that "provided opportunities for millions of students," because of the actions of one group.

fraud – n. the crime of using dishonest methods to take something valuable (such as money) from another person

deceive– v. to make someone believe something that is not true

assured –adj. to be sure that something will happen

exploit– v. to treat someone in a way that unfairly helps you, not them

relief- n. the removal of something that is difficult or painful