US Census Decides How Many Lawmakers to Send to Congress

Update Required To play the media you will need to either update your browser to a recent version or update your Flash plugin.
By Kelly Jean Kelly
23 December, 2018


The United States Congress is supposed to represent the U.S. population. Yet the number of people who live in the country keeps changing.

So every 10 years, on years that end with a zero, the federal government organizes a nationwide census. That is, the government counts up the people who live in the U.S. and its territories. 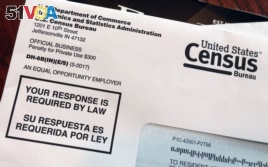 Census workers also ask questions to help officials better understand the kind of people who live in each home or household. Questions include residents' ages, their ethnic group or groups, and what kind of place they live in: a house, apartment building or other kind of home.

Individuals' answers are kept private for 72 years. But the general information is widely shared.

For example, everyday Americans can get the number for the total U.S. population. They can learn what percent of Americans are children or older adults; male or female; African-American, white, native, Latino or mixed.

They can find out about how many people are immigrants or speak a language other than English. They can get an idea of how much money the average household earns, and how many people have completed high school, college or advanced degree programs.

This and other information helps the government make decisions related to housing, schools, budgets and other issues. The information also helps identify how many lawmakers an area will send to the U.S. House of Representatives. After a Census, some areas gain seats; others lose them.

The Census is such an important part of the country's record-keeping, it is required by law. The Constitution-writers required a Census count, beginning in 1790. Today, anyone who does not provide answers can be charged up to $5,000.