Update Required To play the media you will need to either update your browser to a recent version or update your Flash plugin.
By Mario Ritter
17 December, 2015


The United States central bank has raised an important interest rate by one-fourth of 1 percent.

The move may have been small, but it marks the first time since late 2008 that the Federal Reserve has raised important interest rates that it controls. The federal funds rate, a rate paid by banks for short-term loans, is now one-half of 1 percent.

The Federal Reserve Open Market Committee decides monetary policy for the U.S. The committee announced the change Wednesday in a statement on economic policy. It had met for two days in Washington. 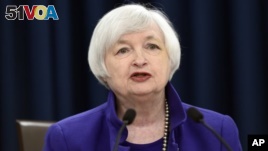 Federal Reserve Chair Janet Yellen speaks during a news conference in Washington, Wednesday, Dec. 16, 2015, following an announcement that the Federal Reserve raised its key interest rate by quarter-point, heralding higher lending rates in an economy much

Janet Yellen, the first woman to lead the Federal Reserve System, spoke after the announcement.

The committee's decision was based on a few factors, Yellen said. Economic growth is expected to continue in the U.S. Another reason to increase interest rates, Yellen noted, was the low official rate of inflation. The central bank has said its target inflation rate is 2 percent. It says that rate would help support employment and keep prices stable. However, inflation currently is not at the target rate, but below 1 percent.

The federal reserve chief also said the strong labor market provided another reason to raise rates. The U.S. economy is adding about 200,000 jobs each month.

The Federal Reserve, or Fed, also released its expectation for some important economic numbers. The fed expects its federal funds rate to reach between 2 percent and 4 percent by 2018.

Yellen was asked if the Fed may have moved too soon in increasing interest rates. She answered that the central bank had weighed many risks and had made a small move.

She said, "The Fed's decision today reflects our confidence in the U.S. economy."

The central bank has kept the interest rates it controls at nearly zero to support lending and economic activity. Financial policymakers considered this necessary as the country recovered from the "Great Recession" from 2007 to 2009.

During that period, home prices dropped sharply and unemployment jumped in the worst financial crisis since the 1930s.

factors – n. something that helps to produce or influence a result

monetary – adj. relating to money policy in a country's economy

normalization – n. the process of bringing something back to historical norms