US, China Agree on Sanctions Against North Korea

Update Required To play the media you will need to either update your browser to a recent version or update your Flash plugin.
By Mario Ritter
25 February, 2016


The United States and China have agreed to place tougher financial sanctions on North Korea.

This cooperation between the U.S. and China against North Korea shows a shift in their relationship, said The New York Times.

The sanctions are meant to punish North Korea for its recent nuclear and long-range missile tests. 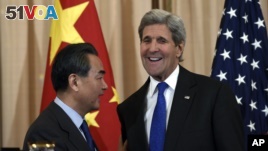 Secretary of State John Kerry talks with with Chinese Foreign Minister Wang Yi as they wrap up their news conference at the State Department in Washington, Feb. 23, 2016. (AP Photo/Susan Walsh)

Details have yet to be released on the proposal.

The announcement came after China's foreign minister Wang Yi's visit to Washington. He met with Secretary of State John Kerry and with National Security Adviser Susan Rice earlier this week.

U.S. National Security Council spokesman Ned Price said Rice and Wang were in agreement on a "strong and united" response to the North Korean tests.

Sanctions a compromise between U.S., China

South Korea's Foreign Ministry spokesman called the draft resolution, "strong and comprehensive." He said, "It contains many effective components which are stronger than anything in past."

The United States has supported tough economic sanctions to pressure North Korean leader Kim Jong Un to give up his nuclear weapons program. China has emphasized maintaining stability in the area and negotiations.

However, China may be signaling that its approach to North Korea has not been working. It may be agreeing that stronger measures are needed.

Some experts doubt that targeting North Korean officials and agencies will have any impact. They question whether the final agreement will impose real economic pain that will be felt by leader Kim Jong Un and the leadership.

Coal could be a target of sanctions.

Chinese and South Korean media reported this week that China has ordered a halt to its coal trade with North Korea. They say some Chinese banks have frozen accounts belonging to North Koreans.

China's Foreign Ministry said it does not know of these developments. However, experts say there is increased popular support in China to cut off possible funding for North Korea's nuclear program.

"China has been intensively discussing how to internally block oil and cash from flowing into North Korea," said Woo Su-keun, a professor of international relations at Donghua University in Shanghai.

There have been questions that China would be slow to reach agreement on U.N. sanctions. The U.S. and South Korea are considering the possible deployment of the controversial Terminal High-Altitude Area Defense, or THAAD, missile defense system.

China and Russia oppose THAAD deployment in Korea. They are concerned that it can possibly be used against their military forces in the area.

The U.S. puts its own sanctions in place, Obama signs bill

The bill requires sanctions on anyone assisting North Korea in its nuclear and missile programs, cyber-attacks or human rights abuses.

The expanded sanctions are designed to deny North Korea the money to develop miniaturized nuclear warheads and missiles to carry them.

The measure also authorizes $50 million over five years for radio broadcasts into North Korea and to support humanitarian assistance programs.

comprehensive - adj. including many or most things

components – n. one part of a system, device or mixture

emphasize – v. to place special attention on something

miniaturize – v. to make something smaller