Update Required To play the media you will need to either update your browser to a recent version or update your Flash plugin.
By VOA
11 July, 2014

The United States and China held two days of high-level meetings in Beijing this week. The talks are known as the Strategic and Economic Dialogue.

The two sides appeared to make little progress on a number of security and economic issues. U.S. Secretary of State John Kerry said on Thursday that he had a "frank" discussion with Chinese officials about computer security. He said attacks on computer systems have harmed American businesses, and "threatened our nation's competitiveness."

China has rejected claims that it is stealing information from U.S. companies. It accuses the U.S. of launching its own cyber attacks against China.

After the 2008 financial crisis, huge Chinese government spending powered China's economy and helped to lift other economies. On Wednesday, China's finance minister said that it is now time for the U.S. to drive the world economy. 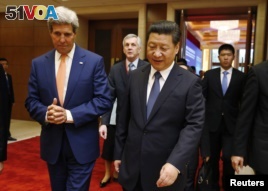 American businesses, in turn, have criticized China for restricting their activity in Chinese markets. They also say the low value of Chinese money, the yuan, helps Chinese exporters sell their products overseas.

Disputes between the two nations remain. Yet many observers believe economic cooperation is very important.

U.S. Treasury Secretary Jack Lew attended the meetings in Beijing. He later told business people that, "strengthening the commercial relationships remains an important test ahead of us. It's a way to create economic growth and jobs in our two countries and it's a way to help drive the global economy forward."

China's State Councilor Yang Jiechi agreed that business is what he called the "backbone" of U.S.-China relationship. He said, "I believe all departments from our two countries' governments will pay high attention to the proposals and suggestions raised by all entrepreneurs today."

The talks in Beijing also included on discussion of Chinese territorial claims in the South China Sea. The U.S. has blamed China for raising tensions in the area and called its territorial claims, "problematic."

In the past few months, China has established an air defense zone over disputed waters with Japan and put an oil rig in an area claimed by Vietnam. China also declared rights over waters claimed by other nations in the South China Sea.

The U.S. pivot to Asia policy has led to new security agreements with the Philippines, Japan and South Korea. It also is leading to additional U.S. military forces in the area. China said the U.S. policy is designed to contain its rise as the main power in East Asia.

On Wednesday, Chinese President Xi Jinping spoke at the opening of the meetings. He said that, "China-U.S. confrontation, to the two countries and the world, would definitely be a disaster." Mr. Xi asked both sides, in his words, to "look far into the distance, strengthen and persist on cooperation, and avoid confrontation."

Mr. Kerry said that the U.S. is not seeking to contain China and hopes that China works to guarantee regional security.

"Despite our differences, our two nations have the ability to find common ground. That's the foundation on which we need to build decades of prosperity for the future, and also build possibilities of stability and peace at the same time."

The U.S.-China Strategic and Economic Dialogue have failed to produce much substance in the past few years. But they have helped reduce tension in the East Asia. Stapleton Roy is a former U.S. Ambassador to China.

"It is very important for us to have mechanisms that work and try to address the types of issues that arise between two countries such as China and the United States. And I think this Strategic and Economic Dialogue is one of those mechanisms."

And that's In the News from VOA Learning English. I'm Christopher Cruise.

*This report was based on stories from VOA's Scott Stearns and Shannon Van Sant.