US, China Look at Chinese Company’s Trade with North Korea

Update Required To play the media you will need to either update your browser to a recent version or update your Flash plugin.
By Mario Ritter
21 September, 2016


Chinese and U.S. officials are said to be investigating a Chinese business with ties to North Korea.

The business is suspected of helping the North Korean government avoid international sanctions. Those measures are meant to punish the North for seeking to expand its nuclear weapons program. 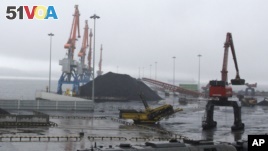 Coal brought from Siberia is ready to be loaded onto a ship bound for China in the North Korean special economic zone of Rason.

The companies are suspected of operating 10 ships involved in North Korea's mineral trade, including coal. They also operate a hotel linked to a group of North Koreans who attack computers overseas.

Go Myong-Hyun is a researcher with the Asan Institute for Policy in Seoul. He said the companies "are actually selling to the North Koreans dual use goods, which are explicitly forbidden by the United Nations sanctions."

Go is one of the writers of a report about Liaoning Hongxiang Group and its activities in North Korea. The Asan Institute released the report on Monday.

The value of the trade between the conglomerate and North Korea is estimated to be over $500 million. The report said the trade could provide financing for the North's nuclear development program.

Part of the conglomerate, Dandong Hongxiang Industrial Development Co., imports almost all of its goods from North Korea.

The report also points to satellite pictures of a ship linked to the group at a North Korean port where coal and iron is exported. Most mineral exports from the North are banned under U.N. sanctions. However, trade in coal or iron not linked to government organizations is permitted as a humanitarian exception.

A company linked to Liaoning Hongxiang Group has ties to a hotel suspected of being the base for a North Korean cyber-attack group.

North Korea has continued its nuclear and long-range missile programs in violation of strong U.N. sanctions.

On September 9th, the country carried out its fifth nuclear test, the second this year. And on Tuesday, North Korea's state media reported that a test of a new rocket engine was successful.

Brian Paddan reported this story for VOANews. Mario Ritter adapted it for Learning English. George Grow was the editor.

We want to hear from you. Reach us in the comment section below.

sanctions – n. measures against a country to cause it to obey international law

conglomerate – n. a large business that oversees a number of other companies often in different kinds of industries

allegedly – adv. said to have happened, but not yet known

blacklisted – adj. placed on a list of people or groups that should be avoided